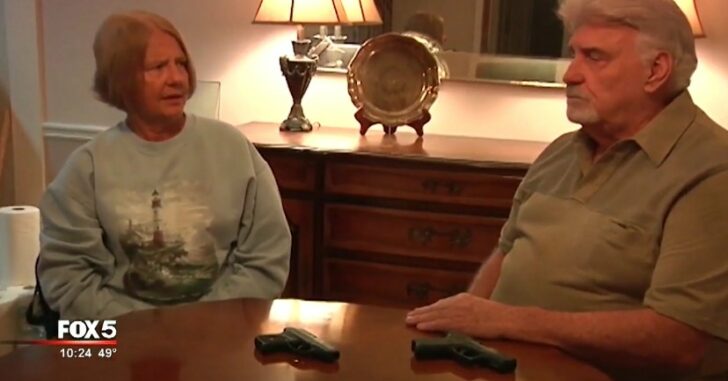 GWINNETT COUNTY, GEORGIA — An elderly man’s life was saved when neighbors heard his cries for help from inside his home. Karen Duncan, who was walking up the pathway to a friend’s home, heard the cries and then sprang into action.

“She kind of started running towards the house,” said her friend, Ron Childress. “I could tell something was wrong and she hit [my] doorbell in a panic.”

Armed, Duncan grabs her purse and takes out her firearm. She and Childress immediately go over to the home and quickly realized that their instincts were correct.

“As I got closer I realized that there is this elderly gentleman laying on the ground with a younger man on top of him with a knife,” said Duncan.  “I see blood and this big old knife.”

Duncan pointed her gun at the younger man and told him to stop and drop the knife. Once the man saw the gun, he threw the knife down and put his hands up. Her friend Childress, who is a former law enforcement officer, was close behind with his firearm and ordered the man to the ground with his legs and arms out.

Both Duncan and Childress credit their firearms for stopping the assault, and fear that the elderly man would have been killed if they hadn’t acted so quickly.

“You cannot protect everybody, police can’t do it, they’re good after the fact, but they’re no good to you when it happens generally,” said Childress. “They’re not going to be there so you need to be ready to protect yourself and others because what happened yesterday is a perfect example of how a citizen can protect other citizens,” said Childress.