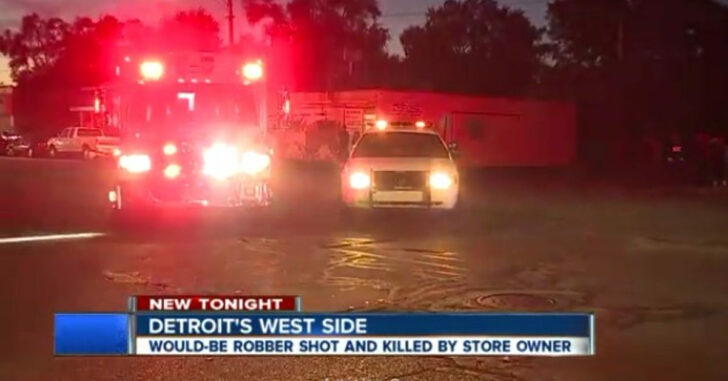 DETROIT, MICHIGAN — A robber was shot and killed by the store owner of the ‘Hip Hop Store’ on 7 Mile and Forrer after the owner fought back. The fatal shooting occurred outside the store but Detroit police believe this was an honest case of self-defense.

“If there’s an attempted robbery, a citizen has the right to defend himself,” Officer Mark Thornton said to Click2Detroit.

According to WXYZ ABC News 7 Detroit, the robber’s family came forward and said he just had a baby a few weeks ago. While we certainly feel for that kid having to grow up without a father, the chances of that kid ever seeing his father are pretty minimal. If he wasn’t shot and killed this time, he likely would have been arrested for something else soon after — or shot and killed somewhere else.

It’s not the job of the law-abiding citizen running his business to wonder whether or not the robber attacking him has people that depend upon him. That’s a question that needs to resonate within the criminal himself prior to committing the crime.

Once the fight begins, it’s very much you or him. We’d prefer you pick you.

The business owner had a license to carry a concealed handgun but he very well didn’t need it because he was in his place of business.

The ‘Hip Hop Store’ became famous on account of Enimem. It’s become a mini-Mecca of sorts for the Detroit hip-hop scene. Unfortunately, it may also attract idiots with absolutely no sense of responsibility to their households, family, or community.

Detroit can be a pretty rough place. Unfortunately, as times get more desperate, idiots get more desperate. Bad ideas like “maybe I should beat up an owner of a store and rob his business” may start to sound like semi-rational thoughts. They’re not. But the only way that lesson is going to get hammered home is if law-abiding citizens refuse to back down.

Stand up for your own safety, health, and well-being. Carry concealed every single day.