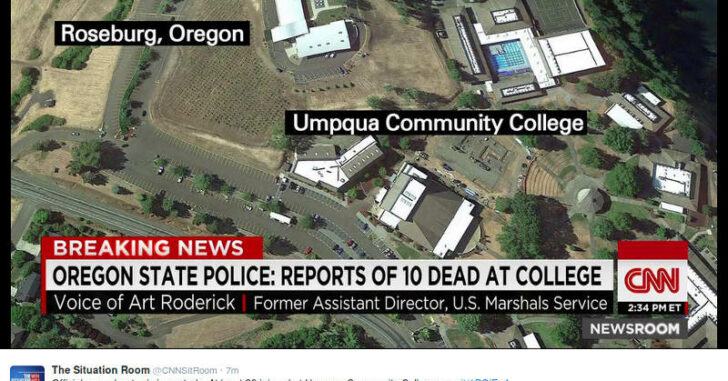 ROSEBURG, OREGON — Initial reports are breaking of a mass shooting earlier today involving an unnamed assailant on the campus of Oregon’s Umpqua Community College during the first week of classes for students.  The Washington Post  reports that the gunman was killed during an exchange of gunfire with police.

CNN reports that the gunman went between multiple classrooms and there are indicators the gunman may have made social media posts warning of this event.

Police reported first contact within 5 minutes of the shooting.  Active audio transcript of the encounter can be found here.

The initial shots were reported from Snyder Hall, as told by one school official while responding to KATU.

KATU is revising those numbers to upwards of 15 dead but still awaiting secondary confirmation.  Many of the injured whom were evacuated were considered in critical condition.  Additional deaths may be likely as the situation develops.

11:31: Nine agents with the U.S. Bureau of Alcohol, Tobacco, Firearms and Explosive – seven from Portland, two from Eugene – sped to the scene and were en route when a supervisor was reached at 11:29 a.m.

First response by law enforcement appears to have taken place at 10:40 am PST.  Oregon State Police confirm that the shooter has been detained.  The FBI, ATF, and Federal Marshalls are all arriving on the scene to continue this investigation. Umpqua Community College, located in Roseburg, Oregon, was first established in 1964 and is estimated to have up to 3,300 full-time and part-time students and faculty on its campus. CNN reported that the Umpqua Community College campus is considered a “gun free zone”, with a weapons policy that prohibits the carriage of firearms by concealed carriers.

This article will update with additional news.