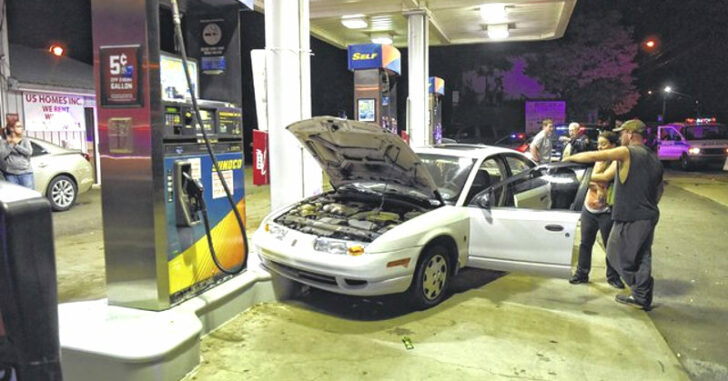 PLYMOUTH, PENNSYLVANIA — A concealed carrier certainly has his moment in the sun after successfully stopping a man from stealing a car from a woman with her two children in the backseat.  Multiple witnesses confirm that the suspect entered the Quick & EZ Stop in Plymouth in what was described as “in a huff”.  One customer was inside with the clerk at the time.  The woman got her things and got into her car.  When asked if the suspect was alright by the store clerk, the suspect left and attempted to gain access to the woman’s car.  According to the woman, he told her to get out of the car and she refused.  He kept trying to gain access and when that failed, he yelled, “she’s trying to kill me!”

Okay, so he obviously doesn’t have his strategy in order.  This is when the 911 calls began to pour in.

As the suspect ran across US Route 11, he stopped a white Saturn and pulled the driver out of the car.  The woman fought back, screaming that her two children were in the back.  She would not give up control of the vehicle to him, no matter how brutal he was.

It was at this point that a concealed carrier, who had pulled into the gas station to purchase cigarettes, saw what was going on and decided it was time for this to stop.

He pulled a gun and said, “I have a license to carry this gun, don’t move.”

The suspect wised up to a simple truth.  He had two choices: comply or don’t.  The suspect then surrendered and waited for police, who arrived shortly afterwards.

[The concealed carrier] said his thoughts were with his son, who is at Parris Island, South Carolina [for Marine Corps Basic Training], but that he “had to do what he had to do.”

“Its something everyone needs to do,” he said, “Stop up and take back their town.”

No rounds were fired.  No people were hurt as a result of the concealed carrier’s actions.  No children were kidnapped.  Wow.  That’s crazy.  Don’t let the media find out.