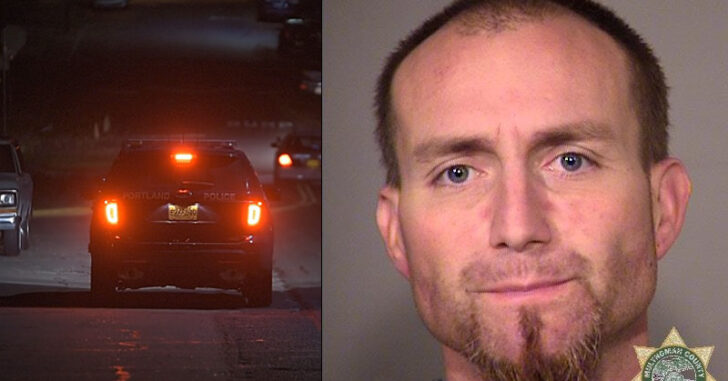 PORTLAND, OREGON — This may just top the list for stories we’ve reported in terms of pure creep factor.  A man armed with a knife quietly broke into a couple’s home and hopped into bed.  The husband awoke when the man planted a kiss on him.  According to KATU, the husband immediately freaked out and grabbed his gun.  Richard Dean Defeudis, 32, quickly pulled on his pants and booked it out of the house.  Not missing a beat, the husband chased after him shooting wildly.

Defeudis escaped down the street and was later captured by Portland police in a nearby abandoned house.  He was uninjured and charged with felony counts of burglary, first-degree sex abuse, and unlawful use of a weapon.

Okay.  Let’s stop for a second.  I can’t blame the guy for freaking out and opening fire wildly on the man.  I want to say the guy was irresponsible — to say the least — to give chase while shooting.  It’s a danger to other people’s livelihoods in adjacent properties.  That said, who amongst us can claim he or she would act in a calm, collected manner while being awoken at three in the morning by the kiss of a stranger wielding a knife?

No damages were reported from adjacent property.  Nobody was hurt.  Bad guy was caught and is in jail.  Obviously plenty of people were shaken up by the news of this and not least of which would be the man and wife whom were sharing a bed.

Invasion of the home is one thing.  The seeking of an intimate and potentially violent sexual relationship in the dead of night is on a whole level on its own.  There’s not a homeowner in existence who doesn’t fear the nightmare scenario of awaking to find the enemy has breached the gates.  To find the enemy in your bed?  That husband was both surprisingly lucky and fortunate to not have injured himself and others in the immediate defense of himself and his wife.

That said — giving chase while shooting a gun are two recipes for disaster.  There’s plenty of life lessons here but I can’t chastise a guy trying to defend his life (amongst other things) in close quarters.

What’s your take on this?  Tell us in the comments section below.