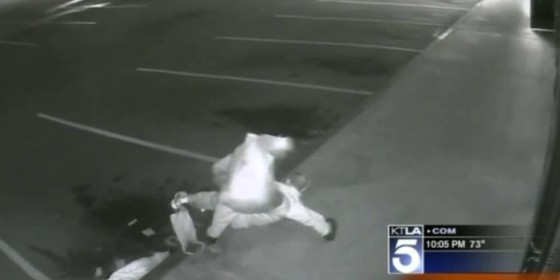 SANTA ANA, CALIFORNIA — In an unprovoked and disgusting attack, a suspect brutally punched and kicked an 83-year-old man simply because he was walking past him.

The victim, identified as Tuyen Nguyen, was going about his morning routine of grabbing a cup of coffee and a newspaper.

Footage released by authorities shows Nguyen walking unassumingly when he is suddenly approached by another man, who punches him in the face.

In an attack that police detectives described as “without provocation,” Nguyen then falls to the ground and is apparently punched at least two more times before being kicked by the assailant.

Neuyen was taken to the hospital with broken bones in his face, as well as a brain hemorrhage.

“He’s in a lot of pain right now, physically,” his daughter, Julie Nguyen said. “And for us it’s a mental anguish, mental pain. It’s a lot.”

In California, it’s next to impossible to obtain a permit to carry a firearm. So, it’s up to the police to be at the right place at the right time, and that’s just not reality. Had someone been in the area –say an armed citizen– the brutal assault may have been stopped.

Speculation, I know. But this outcome that happened is the alternative. I side with people being armed.

Anyone with information was asked to contact Detective Cpl. Leo Rodriquez of the Santa Ana Police Department at 714-493-9135 or Orange County Crime Stoppers at 855-TIP-OCCS.