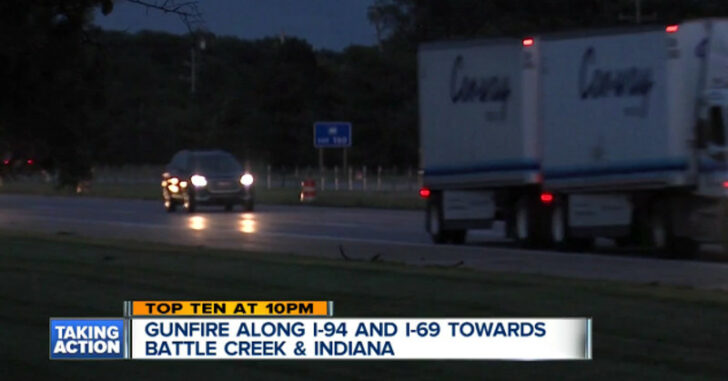 BATTLE CREEK, MICHIGAN — Reports are trickling in via ABC News and WXYZ Detroit over suspected sniper fire along the main interstates of I-94 and I-69 around Battle Creek, Michigan.

Sheriff Matt Saxon of Calhoun County has noted that all of the incidents have occurred between 9 am and before 6 pm.  Authorities note that there have been five reported incidents along these corridors in less than a month.  No known fatalities or injuries have been reported but authorities suspect more vehicles may have been hit and simply not know it yet.

Sheriff Saxon further warned that if you believe you are taking fire to not stop the vehicle.  Continue to roll through until you get to a safe location and dial 9-1-1.

Unfortunately, this isn’t the first time sniper activity has been reported along these corridors.  In 2012, Raulie Casteel, 44, was charged with terrorism after 23 vehicles reported being shot at.  He’s currently serving 18 to 40 years.

ABC confirms that Calhoun County’s Sheriff’s Department is currently leading up the investigation to identify the potential shooter – including priority forensics and securing additional resources to conduct the manhunt.

We will follow up on this story as more comes in.