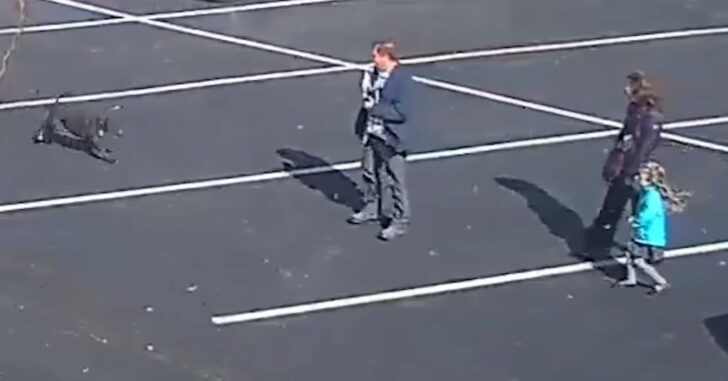 Carrying a gun is a wise decision, but it’s not always practical in all situations. As part of your carry routine, a nice high-quality pocket knife should also be included.

This family was walking to their car after a church service when a dog, walking by itself down the street, spots the child that’s walking with the parents. The dog takes a turn and moves directly for that child, latching onto her arm before anyone knows what’s going on.

The father jumps into action immediately, trying his best to get the dog to let go. It’s of no use, and probably entices the dog to grab and rip even harder.

As time goes on, the father gets the dog up off the ground, and other people in the area are over to help as well by this time.

The father reaches into his pocket to pull out his knife, which takes him a good few seconds. When he finally has the knife out and ready, he stabs the dog, who immediately releases it’s grip.

Another stab from the father and the dog runs off, eventually being euthanized as a result of the attack and probably a bad upbringing as well.

The child suffered injuries, but is expected to make a full recovery.

There’s a lot to learn from this one. Give it a watch.

Previous article: Gun Owners of America Applies for Red Flag Order Against Senator Charles Schumer After Statement Next article: Homeowner Shoots, Kills Man Who Lured Him Outside And Attacked Him