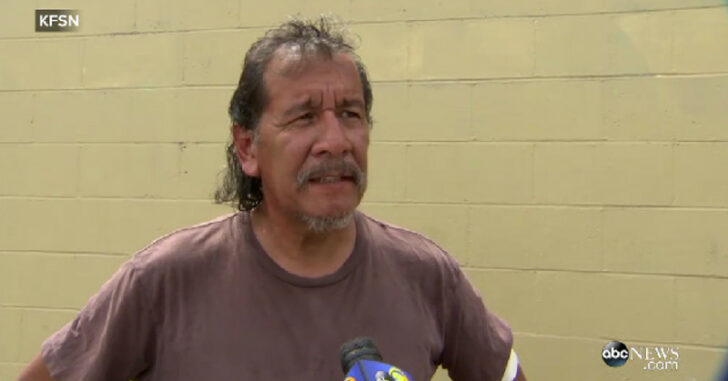 FRESNO, CALIFORNIA — It’s a rare thing to see a man step up to defend someone being brutally beaten right before his eyes.  That’s precisely what one homeless man did outside a Fresno liquor store when he saw a man pull a woman from her car and beat the teenage girl unconscious.

“He would have killed her,” Paul DeLeon said to interviewers from ABC News.  “I have no doubt in my mind he wouldn’t have stopped.”

So DeLeon stepped in with his mace, subdued the attacker and got the unconscious woman to safety.  But it didn’t end there.  DeLeon said the man looked at him and said he would be back.  And he did just that.

According to ABC News, After the woman was evacuated in an ambulance, DeLeon said the man returned in his white Lexus and opened fire – hitting DeLeon once in the arm.  DeLeon got out his registered handgun and returned fire – putting three rounds into the Lexus before it drove off.  Officers nearby saw the Lexus driving off at a high rate of speed and attempted to pull it over but the driver got out and fled on foot.  No word on his whereabouts at this time.

DeLeon was treated for the gunshot wound he received to his arm.  As he calmly recalled the events for the news reporter, he motioned to his freshly bandaged arm.

“The bullet went through,” DeLeon nonchalantly said, pulling up his sleeve to show the newscaster.  “It’s not bad.”

Detectives said they are searching for the suspect, who could be facing charges of spousal abuse and assault with a firearm. DeLeon was not arrested or charged and was called a “Good Samaritan” by the FCSO.

While police are hailing the 53-year-old’s work and crediting him for saving the life of the woman, they advised to ABC that it’s better to call 911.  If we lived in that world, there would be a woman beaten to near death and police would be showing up with a mop.  Thankfully, there’s people out there like DeLeon – who executed the defense of another person and his own self-defense to perfection.

Police say they know the identity of the attacker but have not released his name at this time.  If brought in, he’ll likely be charged with spousal abuse and assault with a deadly weapon – both relatively minor charges in the California justice system.

Previous article: Man Sleeps With Gun, Winds Up With Negligent Discharge And Numerous Wounds Next article: Cover VS Concealment: What's The Difference?