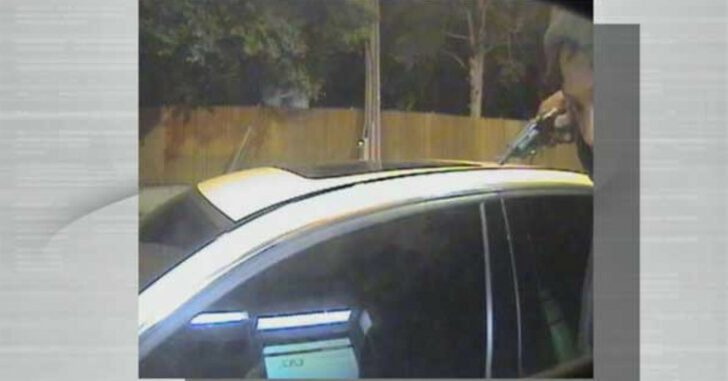 OKLAHOMA CITY, OKLAHOMA — A man survived an attempted robbery at gun point after making a deposit at a bank in June.  Surveillance images released through FOX-25 Oklahoma City show the attempted mugger levelling a gun at the victim.  Rob Dezjuan Jackson did not have his firearm on him at the time.

“I reached into my bag to get my ATM card and get him some money and as I did that I noticed my car was already in drive, so I just drove out of the terminal to get away from him,” Jackson said.

Jackson said he crouched down as he drove away in case the robber attempted to shoot at him.  The robber fled the scene and Oklahoma City Police are on the look-out.  In the meantime, Jackson claims the experience changed the entire way he views daily carry.

“It’s a pretty life changing experience if you’ve never been held at gunpoint. It kind of terrifies you,” Jackson said to reporters from News-9.

While authorities are still hopeful of receiving a tip that will turn them onto the suspected robber, Jackson isn’t taking any more chances.  Reporters from News-9 recall him saying that from now on – he’ll be armed everywhere he goes.

Everything Changes Once A Gun Is Pointed At You

One of the unfortunate things about concealed carriers is that they too often leave their firearm at home.  Having a concealed carry pistol can be inconvenient at times, but events like Jackson’s escape only serve to remind us that we can either be on one side of the barrel or the other.

If you’re able to carry your firearm on a daily basis, it enables you to react to potentially violent situations such as this.  While Jackson recalled he didn’t have much time between first seeing his attacker approach and having the barrel of a revolver pointed at him, it’s the ability to escape that’s paramount.

While this criminal knew enough to let his victim go, that’s never something a person should count on.  And being a concealed carrier means you’re in an active position to ensure it doesn’t.

Worth mentioning, you are not allowed to take your firearms into a private business that prohibits firearms in Oklahoma.

A.    Except as provided in subsection B of this section, nothing contained in any provision of the Oklahoma Self-Defense Act, … shall be construed to limit, restrict or prohibit in any manner the existing rights of any person, property owner, tenant, employer, or business entity to control the possession of weapons on any property owned or controlled by the person or business entity.

B.    No person, property owner, tenant, employer, or business entity shall be permitted to establish any policy or rule that has the effect of prohibiting any person, except a convicted felon, from transporting and storing firearms in a locked vehicle on any property set aside for any vehicle.

So, in Oklahoma, a bank may prohibit its customers from bringing a firearm – concealed or otherwise – into the building but cannot oblige you not to keep it in your vehicle.

Would that have helped in Jackson’s particular case?  That would be speculative.  However, it’s a pretty bad situation to be caught reaching for a gun.  Use good judgement.  The path of least resistance may, indeed, be the best one.