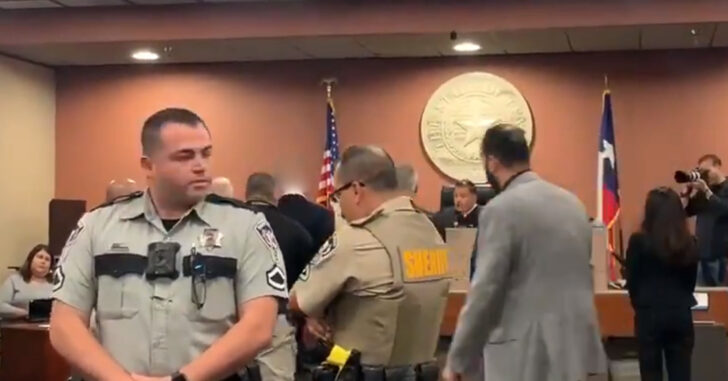 EL PASO, TEXAS — Earlier today, the 21-year-old suspect accused of killing 22 people and injuring 25 others at an El Paso Walmart on August 3rd has pleaded not guilty.

This not guilty plea comes after police say he confessed to the crimes shortly after being apprehended, even telling them that his goal was to target Mexicans.

Cameras inside the courtroom showed the suspect walking up to the Judge and answering his questions, and he seemed like a typical 21-year-old. You know, aside from the fact that he’s a mass murderer.

While we do show a screenshot from inside the courtroom above, and even though the suspect is facing away from the camera, we still removed his head. Just because.

With the not guilty plea, it’s likely to take a long time for the courts to end this ordeal, all the while prolonging any ounce of justice for all of the families affected by this horrible incident.

Local prosecutors have said they will seek the death penalty. Federal authorities are weighing capital murder and hate crime charges. The Department of Justice has called the shooting an act of domestic terrorism.

In any event, I guess, the suspect is likely going to have his life ended via the death penalty. That is, unless he does himself in prior to that. I don’t believe that will be the case, seeing how easily he gave up when police had guns pointed at him after the massacre. The signs of a true coward, not strong enough to pull the trigger on himself.