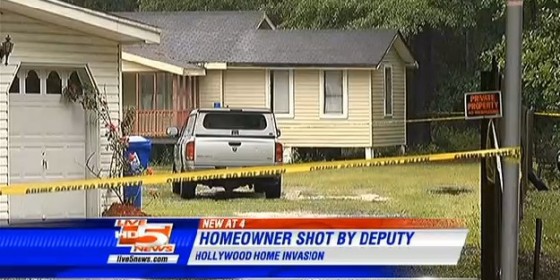 HOLLYWOOD, SOUTH CAROLINA — Sheriff’s Deputies were responding to a call of shots fired and a home invasion when they encountered a man at the residence with a gun, and he apparently refused to drop it.

That man was the homeowner, and he was subsequently shot once in the neck by a deputy. He was transported to the hospital with life-threatening injuries.

The suspects were seen fleeing on bicycles after exchanging shots with the homeowner.

You can’t always blame the police, and this looks to be one of those cases. When officers respond to a call of this nature, they don’t know the homeowner from the crooks all the time. It’s up to you to listen to their directions –especially if you’re armed– and let them control the situation until things are sorted out.

When police get there, your firearm should be out of your hands. The only exception that I can think of would be if you were holding a suspect at gunpoint. Take Aaron’s situation as a perfect example of this –and exactly what you should do.

Not dropping your gun when police have their guns pointed at you is just wacky.