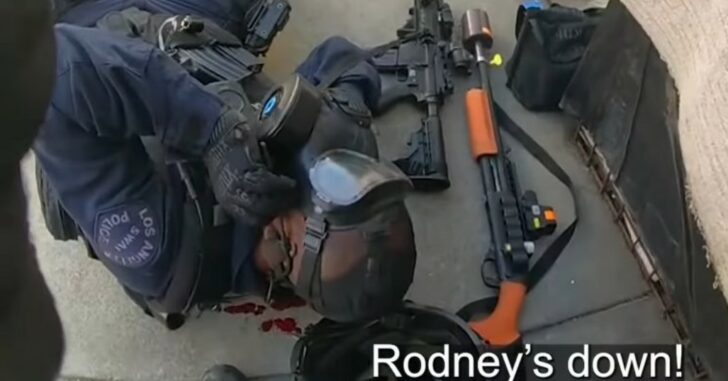 The Los Angeles Police Department has released some dramatic bodycam footage of a standoff that took place on March 16th. In it, an LAPD SWAT cop was shot twice by the suspect using a shotgun, once in his tactical vest and another time wounding him in the neck and face area. Fortunately, he’ll survive. As for the drugged up, barricaded bad guy who was shooting at police…he didn’t make it.

It seemed rather amusing when police negotiators from the Southwest Division tried to lure Jorge Cerda, who was under the influence of…something, out of his barricaded position with the offer of what amounted to a familial hug. That didn’t work. Go figure.

After the standoff dragged on for hours, SWAT officers moved in and deployed teargas.

Officer Rodney Williams’ armor stopped the first round the suspect fired at him. Williams then stuck his head back around the corner once more in a tactically questionable attempt to get eyes on the armed man who had already shot him once.

The suspect then fired again, hitting Williams in the unarmored face or neck area. Williams’ partner dragged his leaking partner out of the danger zone while muzzling him repeatedly with his rifle. At least he didn’t have his finger on the trigger and the rifle’s safety was engaged.

Meanwhile, after Williams was wounded, another SWAT cop shot Mr. Cerda from above when Cerda came out of the residence to continue his attack, proving once again that the only thing that stops bad people with evil in their hearts isn’t a hug, but a good guy with a gun.

How can we surmise Mr. Cerda’s intentions?  If he intended to surrender and repent, he wouldn’t have carried a stolen Kel-Tec KSG shotgun loaded with a variety of rounds.

After the bodycam showing the suspect well-ventilated, the LAPD PR officer narrating the video goes on editorialize on the danger of “ghost guns.” It seems Mr. Cerda possessed a Polymer80 pistol or similar product. Obviously the police can’t trace that gun to see it was stolen as the shotgun was.

Frankly, it doesn’t really matter whether the firearm had a serial number or not. Mr. Cerda tried to kill innocent people and in doing so he lost his life. In other words, there is a zero percent chance of recidivism.

By John Boch via TTAG and republished here with permission.

Previous article: Springfield Hellcat RDP. Is This The Ultimate Concealed Carry Gun? Next article: Pair of Armed Intruders Enter Home With Handgun Only To Find Homeowner Armed With Rifle