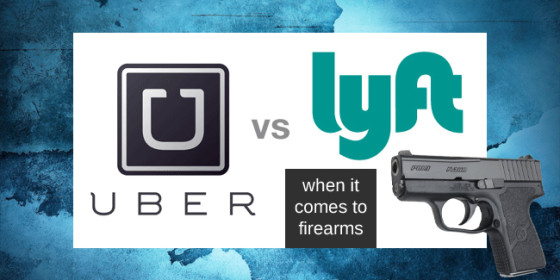 After the incident in Chicago the other day when an Uber driver successfully stopped an attempted mass shooting, the topic of Uber-type drivers being armed has come up. I know, of course it has.

I’m not quite sure why. This was an obvious case of self-defense by a law-abiding citizen. There is no doubt in my mind that the driver saved lives that day.

An article brought to my attention, Your Uber Driver Could Be Packing Heat, And You Wouldn’t Know It, brings up this debate. They start off nicely by agreeing with my thoughts that this man’s actions saved lives. But then, we get ‘the talk’.

It’s quite possible the driver saved one or more people’s lives. But it’s also unnerving: Why is he driving around with a shotgun in his car while he’s on the job? No doubt many of his passengers would have preferred to know as much—ideally before getting into his car.

The answer to the question posed, “Why is he driving around with a shotgun in his car while he’s on the job,” is an extremely easy question to answer. It’s because he values his life, the lives of his customers, and the lives of those around him. He’s an armed citizen that chooses to be prepared if he’s ever, oh I don’t know, faced with a man who decides to shoot his handgun into a crowd. Get it?

Uber spokeswoman Jen Mullin told NBC Chicago that she had “had no comment on the driver’s actions other than to say the company requires all its drivers to abide by local, state, and federal laws pertaining to transporting firearms in vehicles.” That’s the response I like to hear, and that’s the response that a company should be giving after something like this.

In contrast, a similar company called Lyft offers this on the topic:

A spokeswoman directed me to the company’s Weapons Policy page, which states that the company has a “strict ‘no weapons’ policy.” “This means that if any driver or passenger possesses a weapon in a Lyft vehicle, regardless of whether possession is legal where they are, they will be removed from the platform,” reads the page. Lyft reserves the right to judge “what constitutes a ‘weapon,’” and the company says it made the decision “from a community perspective.” “It’s hard to know what someone else is or isn’t comfortable with. The mere presence of a weapon might make another community member distressed.”

That’s right. Lyft goes as far as saying that not only can their drivers not carry firearms, but their passengers can’t either. In effect, a Lyft vehicle is a designated gun-free zone.

In that case, it’s a damn good thing that an Uber driver was on that street in Chicago the other night and not a Lyft driver. If Lyft were there, it’s likely that body bags would have been there as well.

Previous article: Negligent Discharges: Are They Inevitable? Next article: Woman Negligently Shoots Herself After Hot Brass Goes Down Her Shirt