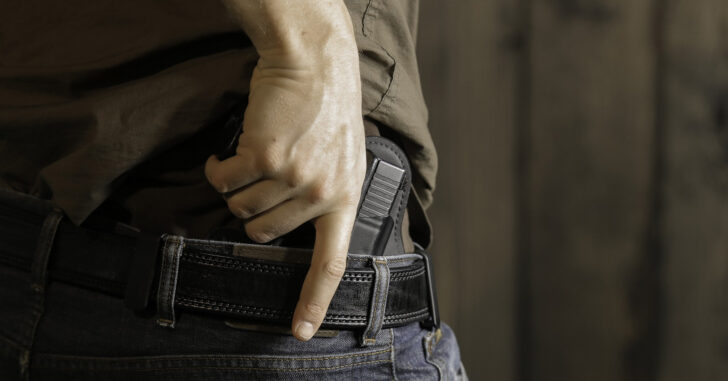 The decision to carry a concealed firearm is an important, deeply personal one. You are carrying. Youare responsible for your gun and what you do or don’t do with it, should you, your loved ones or other innocent life face a credible, imminent threat of death or grievous bodily harm. No one can make the decision to carry for you. But they sure can make it difficult. If someone close to you is anti-gun – whether its a significant other, a friend or a colleague – telling them you’re carrying can be awkward or, in some cases, downright confrontational. Here are three tips for coming out of the concealed carry closet . . .

You have a natural, civil and Constitutional right to keep and bear arms. As TTAG master fisker Bruce Krafft points out, your gun rights are subject “neither to the democratic process nor to arguments grounded in social utility.” Nor should it be subject to someone else’s opinion about whether or not you have a right or even a “need” to carry a firearm. You are under no obligation to inform anyone of your concealed carry handgun.

The gun community has an expression: concealed means concealed. Telling someone you have a gun violates that principle, designed to maintain what gun gurus call “operational security.” There are plenty of ways to conceal a firearm so that no one knows you have it: ankle holsters, pocket carry and other comfortable carry systems (holster and gun). You still have to master some awkward moments. Going to the bathroom, returning to your car or not entering a “gun-free” zone can be challenging. But youcan do it.

I hate to say it, but fear is your friend. Have a conversation with your significant other (SO) about personal safety, a discussion designed to show them the problem with not having a gun.

Lead them. Put the whole discussion in question form. If you don’t have a handgun at home, start with home defense rather than concealed carry.

What would you do if someone attacks you, me or little Michal? Where would you/we go? How long would it take the police to arrive? Move the talk towards weapons. If you had to defend yourself with a weapon, what would you use? Don’t be afraid to introduce the specter of death. What would happen if someone killed me or you? Or, yes, raped one of us?

Don’t hurry. It could take several conversations over several months, perhaps using news stories to revisit the topic. Feel free to leave firearms catalogues strategically placed where you SO can happen upon them. If this concealed carry campaign leads to arguments – “You’re obsessed with guns!” – so what? Is there anything worth arguing about more than life or death?

Anyway, get a gun into the home first. If you keep it locked-up, take it out every now and then. That way your SO will realize that A) there is such thing as a gun B) there is such a thing as a gun in your shared world and B) it doesn’t hurt anyone. Then you can move on to concealed carry.

[Proceeding to home carry and then concealed carry outside the home is an option, but that could backfire.]

If you already have a handgun in the home, ask “what would happen if we were outside and we were attacked?” Use specific examples. What would happen if someone attacked you in the supermarket car park? After work? Notice that you’re talking about your SO’s safety, not your own. An SO is more likely to approve of your concealed firearm to defend them or the kids, rather than yourself. Go figure.

You might want to say that you’d like to have a concealed carry firearm for certain situations (e.g. when you’re going out to dinner). Again, we’re talking about normalization. Carrying every now and then leads to carrying all the time (which is exactly what you should do).

Remember: you’re not easing your SO into “allowing” you to concealed carry. You’re helping them accept your decision, your inalienable right to armed self-defense. Be calm. Be resolute. Be patient.

As the survivor of not one but two divorces I am unqualified to offer relationship advice regarding anything contentious. This much I know: there are times in every relationship when a man or woman’s gotta do what a man or a woman’s gotta do. (I believe the expression is “put your foot down.”) You can come out of the concealed carry closet all at once with no prior discussion.

“I’ve decided to carry a concealed firearm to protect myself, you, our friends and family and (perhaps) other innocent life. This is my gun. This is my holster. This is my gun safe. Deal with it.”

Carrying a concealed firearm is a life-affirming decision. Once you’ve made it, or as you make it, have the courage of your convictions. Don’t take no for an answer. The life you save may be the life of the person who rejects, ridicules or seeks to restrict your decision.