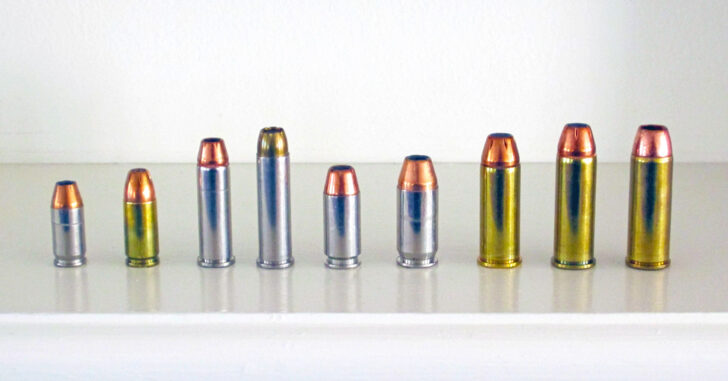 When we consider the choice of caliber for our concealed carry gun, we often stick to the well-known choices: .380, .38 Special, .357 Magnum, 9 mm, .40 S&W and .45 ACP. All of these rounds have their pros and cons, and you will find people who will swear by one or the other. The .380 gives you a wide choice of extremely concealable auto-loaders with all different systems of operation. The .38 Special is the round of choice in the ever-popular S&W J-frame snub nose revolver, which has proven itself time and time again as both a primary sidearm and a backup or deep concealment piece. A .357 needs to be somewhat heavier if the user is to avoid punishing recoil. The 9 mm appeals to those who like lots of rounds on tap in a compact pistol. With the latest in high-performance projectiles, there are those who claim that performance is just as good as the old reliable .45 ACP, the battle-proven veteran for those who believe that bigger is better. The .40 S&W gives a good-sized big bore combined with the high round count of the 9 mm in an auto-loader. Those who favor revolvers are definitely in the minority, but those who do tend to like the well-proven .357 Magnum, which in most ballistic tests is neck-and-neck with the .45 ACP. Today we’ll take a look at this choice that every concealed carrier has to make. We are not going to rehash the interminable debate of 9 mm vs. .45 ACP except for pointing out some recent developments. We’ll also point out some less common but excellent choices such as the .44 Special, which has a small, but very loyal following. Let’s get started.

First off, I am not going to discuss such rounds as the .22 LR, .25 ACP, .30 Luger, .32 ACP, or 9 mm Makarov (9 x 18). These all have their place, and there are people who use them. It is fair to say, however, that none of them are really “mainstream” in the vast majority of handguns sold for defensive purposes. The same goes for the .44 Magnum, .454 Casull, .50 Action Express and the .500 S&W. These big bores are more suited to hunting purposes, or for a back-up gun used for protection against bears while fishing in Alaska. Although there are some folks who successfully conceal a .44 Magnum, the round is literally “overkill” for defense against human assailants and the recoil in a lightweight gun is punishing. I will confess that I own a 3″ S&W Model 29 which I carry from time to time. On those occasions, I load it with .44 Specials.

Further, I am not going to presume to tell anyone which round they should choose. The choice of a concealed carry gun is a very personal thing. You should use what works for you. I will, however, try to point out some of trade-offs you must expect to make between concealability, power, recoil, training, etc. Hopefully, this information will help each of you make your own choice.

Consider Both Ends of the Gun

In choosing a self-defense round, we need to consider two effects. One is the effect that the projectile will have upon the target. In a defensive situation, your objective is to put an end to the threat as quickly as possible. That means that a single hit (or multiple hits) should be able to stop the hostile action of a human target. Shot placement is critical. A hit to the central nervous system with a .22 LR or a .380 will have the desired result most of the time. Nothing is certain. Since we cannot always place the first round exactly where we want it, especially when under severe stress, the effects of fear, and perhaps injury, more power is a good thing. More power (greater bullet diameter, higher velocity, more bullet weight, more expansion) will mean more damage to the target, but these factors also take their toll on the shooter in terms of recoil. Less recoil means faster follow-up shots. You can decrease the recoil of your firearm by using a lighter bullet, lesser velocity, or a heavier gun. A heavier gun is either harder to conceal or less convenient to carry. You get the idea.

Every choice is a compromise. The one item over which you have direct control is your level of skill. Skill is increased by training and practice. I have seen large men who flinch when firing a .380. By the same token, there are some well-trained, petite women who fire .45 ACP +P rounds with speed and accuracy. Without training and practice, your firearm is useless. With the proper training and sufficient practice, you can become an expert shot with the firearm and round of your choice.

Before commenting on the pros and cons of individual rounds, I will present a table which lists typical ammunition in the various common defensive calibers. No specific brands are mentioned, but bullet weight, bullet type and typical muzzle velocity are given. There are two columns which contain information important to you. They are “Muzzle Energy” and “Power Factor.” Muzzle energy is the kinetic energy of the projectile at the muzzle (typically measured 10 to 15 feet away). The kinetic energy of the projectile is transferred to the target. The more energy transferred, the more damage done. Of course, shot placement is the most important thing, but everything else being equal, the more energy on target, the better. Power Factor is the product of the bullet weight in grains multiplied by the muzzle velocity in feet per second. In certain types of competition (ISPC, IPDA) the power factor is used to distinguish between a “Major” and “Minor” caliber, with Major being any load with a Power Factor greater than 175,000. The power factor is another way to state the momentum of the projectile, or mass x velocity. Bullet momentum is directly related to recoil in that when the round is fired, equal momentum is imparted to both the bullet and the firearm, but in opposite directions. The shooter absorbs the momentum of the firearm as recoil, while the projectile transfers its momentum to the target. In a nutshell, the greater the power factor, the greater the recoil. By examining the table, you can see that there are trade-offs. That lightweight, soft recoiling .380 is not going to have the punch of a 9 mm, .357, .40 S&W or .45. You are going to have to shoot very accurately under stressful conditions if you choose a .380. Central nervous system hits will do the job, but they are difficult to make. The heavier calibers a little more forgiving. A solid hit, center of mass, will tend to discourage your opponent. The choice is yours. Above all, you must be able to hit your target with the first round and with subsequent rounds if necessary. Old is Not Necessarily Obsolete

Check out the numbers for the .44 Special and the .45 Colt if you prefer a revolver. Both are solid choices. If you have a short-barrel .44 Magnum, the .44 Special will have manageable recoil and still have plenty of power to get the job done. The .45 Colt (sometimes called “Long Colt”) has been around since 1873. It was a potent man-stopper back then, when loaded with black powder. With today’s modern bullets, it is a powerful round with reasonable recoil. A Final Word On Bullets

Bullet design has made tremendous strides in the past 15 to 20 years. Modern, high-performance projectiles will expand reliably at the comparatively low velocities produced by handguns. Whichever round you choose for your self-defense firearm, use high-performance ammunition with premium projectiles. There are many versions of the jacketed hollow point available today. If you use an auto-loader, maker sure your carry gun functions reliably with your choice of ammunition. Fire at least 200 rounds of your carry ammunition through your gun. If you experience zero malfunctions, the ammo is OK to carry.

In summary, there is no one best choice for a self-defense round. It depends on your shooting ability, the weight of your firearm, and your tolerance for recoil. The choice is yours. Stay safe.

Previous article: Georgia Shooting Leaves 5 Dead And 2 Injured, Including Numerous Children Next article: [VIDEO] Must Watch For Any Women Who Carry A Firearm Off Body