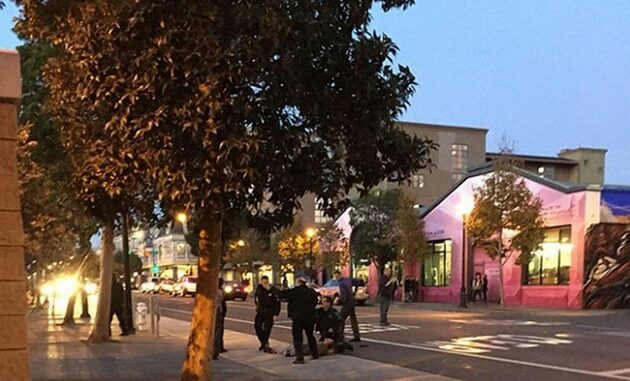 It is now known that the man police shot and killed had planned the event as a ‘suicide by cop’ incident because he “was too much of a coward to do it himself”.

“You did nothing wrong,” the man wrote in a suicide note left behind. “You ended the life of a man who was too much of a coward to do it himself. I provoked you. I threatened your life as well as the lives of those around me.”

“You did everything right … Please, take solace in knowing that the situation was out of your control. You had no other choice.”

It’s a sad thing, that this man thought this was the only way to solve his problems. Now, the officer has to live with taking a life, and that is no easy task.

Sunday evening in San Francisco a man was shot several times by police after threatening them with what turned out to be a fake gun.

At about 5:20 that evening, the man was found in a restricted parking lot that is not open to the public. Three police sergeants approached him, asking him to leave the parking lot. He started to walk away, leaving the parking lot, but before he reached the entrance, the man turned around. He then started to back away, reaching into the waistband of his pants and revealed the grip of a gun. As the sergeants saw the man uncover the firearm, they shot at him several times.

The suspect was transported to a hospital, had surgery, but died shortly after.

It was later discovered that the man, who has been only been identified as a 32-year-old white male, was carrying an airsoft gun. Of course, these guns do not shoot actual bullets, but only pellets. Officer Albie Esparza shared,

“We don’t know his motive or why he challenged the officers or approached them in the first place. It was very erratic behavior by the suspect, very unusual.”

Evidently, the same man attempted to speak with officers earlier that day. Esparza said that the man had asked them what kind of weapons they carry, what kind of ammunition they use, and if they had been involved in shooting any suspects. Because the officers were occupied with a domestic dispute call at the moment, they did not have the opportunity to speak with the man.

Previous article: Correctional Officer Has A Negligent Discharge And Ends Up Shooting Himself And His 12-Year-Old Daughter Next article: 4 Thugs Rob Self-Defense Shop, 3 Wounded In Shootout With Owners, 1 Owner Dead