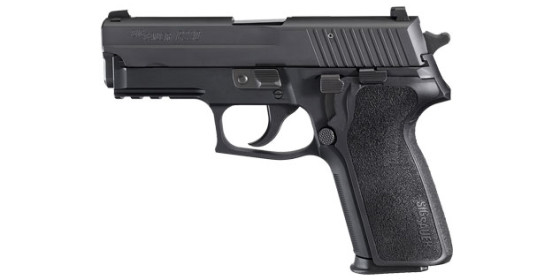 Everything about the SIG Sauer P229 is professional and uncompromising. This is the sidearm of the plainclothes division of the US Secret Service, the officers who guard the President. The Federal Air Marshal Service uses the 229, as do the State Police forces of Texas, Vermont, Virginia, and Delaware. Other Law Enforcement agencies too numerous to mention also choose this outstanding pistol. Even though the 229 is worn openly by many uniformed officers, it is still sufficiently compact to be worn concealed by an undercover officer or dedicated civilian. The SIG 229 has a very comfortable grip and a satisfying feel in the hand. The fit, finish, and level of workmanship are all first-rate. There is nothing loose or sloppy. This is a solid gun which inspires confidence.

First introduced in 1992, the Model 229 was the successor to the P228, a compact version of the legendary P226. The 9 mm P226 was the sidearm of choice of the Navy SEALS at the time, and is still carried by many special operations forces worldwide. The 228 was a slightly shorter and lighter 9 mm better suited to concealment. The 229 was an entirely new design, especially made to handle the increased pressure and stiffer recoil of the .40 S&W cartridge. While the 226 and 228 had slides formed of heavy sheet metal with a solid breech block pinned in place, the 229 features a slide machined from stainless steel bar stock. This slide, made in the SIG Exeter, NH facility, is mated to an aluminum alloy frame produced in Germany. The barrel drops into the slide and fits with no play whatever and the slide to frame fit is free of play as well. This is a match-grade product which delivers match-grade accuracy, even after thousands of rounds fired.

In addition to a choice of three different chamberings, you may choose either plain fixed or night sights, conventional DA/SA action or a double action only version called DAK, and a wide variety of finishes, including stainless, flat dark earth and two-tone. Most models have a standard Picatinny rail on the dust cover, but the custom shop SAS Gen 2 has a plain dust cover and a “melt” treatment which makes the gun as slick as a used bar of soap.

The P229 comes in three chamberings. The 9 mm version has a capacity of 15+1 and will handle +P and +P+ ammunition. If you prefer the 9 mm, SIG will accommodate you, although there are many other excellent pistols available. The P229 comes into its own in the .40 S&W version. This cartridge was created by shortening the case of the 10 mm auto and reducing the load. It is sort of a compromise between the 9 mm and the .45 ACP. You get 12+1 capacity, compact size, great ergonomics, and the ability to handle the hottest loads commercially available. This is my personal choice. The .40 S&W has developed an excellent reputation among law enforcement agencies for its performance on the street.

Last but not least is the .357 SIG. This cartridge is a .40 S&W necked down to .357. It was jointly developed by SIG Sauer and Federal for those law enforcement agencies who wanted to switch to an autoloader, but wanted to retain the legendary performance of the .357 Magnum 125 grain JHP load. The .357 SIG duplicates the .357 Mag. velocity of 1350 fps, making it a potent performer. With 13 rounds on tap, a P229 in .357 SIG is a great choice for law enforcement or anyone who wants a high-velocity, powerful handgun. The Secret Service and Federal Air Marshal Service use this cartridge, as do the Delaware State Police. The cartridge has become widely accepted and is now loaded by every major ammunition manufacturer.

If you have a P229 in either .357 SIG or .40 S&W, you can change to the other caliber simply by switching barrels. The two loads use the same magazine.

The P229 has an exposed hammer and conventional magazine release button at the left rear of the trigger guard like many other semi-autos, however, there is no external safety. On the left side of the grip are two levers. the one closer to the shooter is the slide stop, which works in the conventional manner. The slide remains open when the last round in the magazine is fired. After switching magazines, press downward on the slide stop to release the slide and chamber a round. Magazines will fall free when released. There is no magazine disconnect, so the pistol will fire without a magazine inserted. The front lever is not a safety, but a de-cocking lever. With a round chambered and the hammer fully cocked, a downward press on the de-cocker safely lowers the hammer. The gun now has the hammer down with a live round in the chamber.

There is an internal firing pin block which prevents the firing pin from reaching the primer of the chambered round unless the trigger is pressed fully to the rear. In this condition, the gun will not fire even if dropped directly on the hammer. This is also the proper condition in which to carry the holstered pistol. After drawing, the user may either thumb cock the hammer (not recommended) or fire the first round with a long double action pull, without disengaging a manual safety. Successive rounds will be fired single action, in that the hammer is cocked as the slide recoils to the rear to eject the spent casing and chamber a fresh round from the magazine. After firing, the pistol may then be returned to its original condition by pressing down on the de-cocking lever and re-holstering. This is somewhat different than the operation of other DA/SA semi-autos, but once you are used to it, the system is very natural. Both levers can be actuated by the thumb of the firing hand without shifting your grip. I am not aware if a left-handed version exists. If a left-hander likes this system, the Heckler & Koch USP series offers this mode of operation for either hand. Shooting the .40 S&W is a pleasure, due to the ergonomically shaped grip. Recoil of 180 grain loads is more noticeable than that from 135 grain loads. The bore axis of a SIG is a little higher than that on a Glock, but the recoil is easily managed if the shooter keeps the wrist of the firing hand locked and uses a firm grip. The ergonomics are so good that I have no trouble in keeping a full 13 rounds within a 6″ circle at 25 yards, rapid fire. The gun itself is capable of better accuracy than that, but 6″ at 25 yards is adequate for most defensive purposes. Reliability is absolute.

The ejection port is full wraparound, extending over the entire top of the slide, as well as down the right hand side. In over 20 years of use spanning thousands of rounds, I have never had a misfire, failure to feed, or failure to eject, with the one qualification that I always use factory ammunition.  My gun shows some holster wear on the exterior finish, and the tritium vials in the night sights are pretty dim and in need of replacement. The finish on the barrel and inside of the slide is worn, but the fit is just as tight as when the gun was new.

There is nothing negative I can say about the SIG P229. Everything works as it should, and the gun just exudes quality. The only potential shortcoming is that such quality and performance do not come cheap. A factory-new 229 with night sights has an MSRP of over $1100. If this is an issue, SIG Sauer offers factory reconditioned, fully guaranteed pistols for considerably less. For me, the pain of the initial cost is soon forgotten. Quality endures. The SIG P229 gives me pleasure every time I put it on.