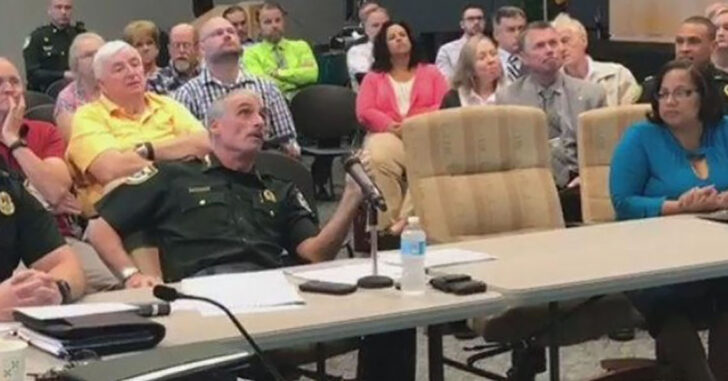 VOLUSIA COUNTY, FLORIDA — Having a firearm inside your vehicle can be a great way of being prepared, but what about when you’re not in the vehicle when the gun is? If this is the route that you take, you’d better be damn sure that your firearm is as secure as possible.

Sheriff Mike Chitwood started his first public crime trends meeting with this exact discussion, and he couldn’t believe the numbers when he first heard about them.

“I didn’t think the number would be staggering. That’s 300 guns out in the street,” Chitwood said.

A recent incident involved a deputy who went to the movies and left firearms in his personal vehicle. When he got out of the movies, he discovered his firearm was gone, Chitwood said.

Chitwood was familiar with the local gun theft problem during his decade as Daytona Beach police chief, but said he didn’t expect the numbers of guns taken out of unlocked vehicles to be that high.

But not all firearms were stolen from civilian vehicles. Some were even stolen from unlocked police cars. It seems that everyone is to blame, and negligence is running rampant.

“Those guns aren’t falling into the hands of lawful gun owners,” Chitwood said. “They are out there with thugs and criminals who aren’t supposed to have firearms that are in turn used against citizens.”

According to a national survey conducted by researchers at Harvard and Northeastern universities, there are about 270 million privately-owned firearms in the United States. Of that number, 2.5% of owners have said they have had a firearm stolen in the past 5 years. That amounts to roughly 400,000 stolen firearms each year.

There isn’t anything illegal about keeping a firearm inside a vehicle in FL while you’re not around, but common sense would dictate that you lock your door. And, of course, have the firearm out of sight and preferably locked in something as well.

“Our appeal is to the common sense of gun owners, overwhelmingly, gun owners are law abiding folks who follow the law,” Chitwood said. “But sometimes you have to follow more than the law and that’s common sense.”

It’s something that can be easily avoided in many of these cases by simply locking your vehicle. It’s common sense, and is irresponsible not to do so.

Previous article: When Seconds Counted In Home Invasion, Dallas Police Were Only 87 Minutes Away Next article: Uncle Shoots Nephew When Argument Turned Violent