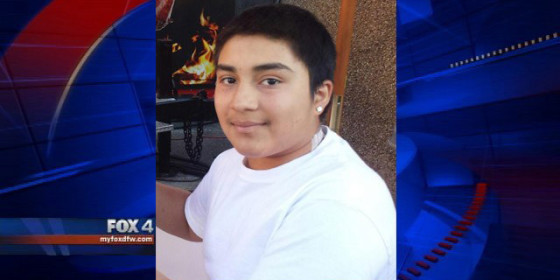 A 15-year-old boy was gunned down in his own driveway during an apparent armed robbery gone wrong. The boy, Ryan Lara, was recently diagnosed with lymphoma, was shot once in the back and later died at the hospital.

Police say that Ryan was moving a vehicle from the road to the driveway when he was approached by an armed person who tried to rob him and then opened fire. A total of three shots were fired, one hitting Ryan in the back.

Family members rushed outside to see Ryan lying in the driveway and a vehicle speeding off. One of Ryan’s older brothers drew his firearm and fired at the fleeing vehicle, but they were still able to get away.

“I ran out, stepped over him and proceeded to pull out my pistol with my left hand and started firing at the vehicle with no headlights or no lights on,” the brother said.

“He didn’t deserve this and I just hope whoever killed him…what’s done in the dark is soon going to come to the light,” said Brandon Lara, another one of his brothers.

Police believe they are looking for a gray or silver four door compact sedan. It is not known how many people were in the vehicle. Anyone with information regarding the shooting is asked to contact Det. Jeff Pollock at 972-780-5000 X 1103 or Crime Stoppers at 1-877-373-8477

Previous article: FBI: Crime Down, Gun Purchases Up In 2013 Next article: 2M In Jewelry Stolen During Brazen Armed Robbery In Manhattan; NYC Gun Laws Help Criminals Get Away