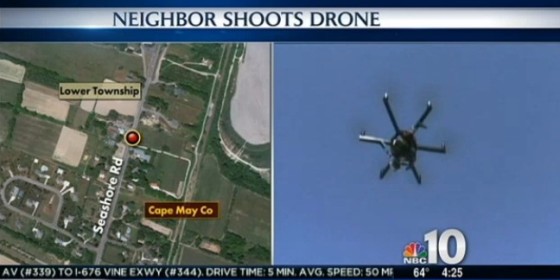 32-year-old Russell Percenti has been arraigned on criminal mischief and weapons charges after he shot down his neighbor’s drone near the Jersey Shore.

The owner of the drone said that he was flying the device over his friend’s home in Cape May County to take some aerial photographs of construction that was being done. At about 5:30 Friday evening, Lower Township Police received a call from the man saying that his drone went down after hearing what he thought were gunshot blasts.

Upon the finding the drone, they discovered several holes. The man directed police to where he thought the gunshots came from, and when they approached Russell Percenti’s home, they did find the shotgun he used to shoot down the drone. It has not been reported the reason he fired at the drone.

Do you think that Percenti overreacted, or would you have done something similar? Who exactly owns the airspace over your home, and would you deem a drone as intruding in your personal and private space?