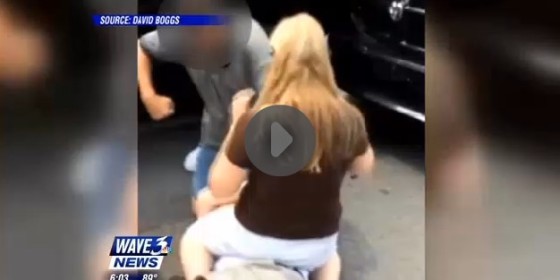 Imagine that you’re driving down the road and come up to an accident that just occurred. You watch as one driver gets out of his vehicle and rips the other driver out of their car and starts punching them while they’re down on the ground.

That’s what happened recently in Kentucky and the incident is now getting national attention. According to a witness who was able to capture the attack on camera:

The attack started when a man — seen wearing denim shorts in the video — crashed into another man’s truck. A witness to the accident, David Boggs, managed to capture video of what happened next.

In the video and eyewitness reports, the man in denim shorts ripped the second driver out of his vehicle. A woman who was with the denim man helped push the victim to the ground, and then pinned him to the pavement.

While the second driver was pinned and defenseless on the ground, the first driver violently punched him in the face.

One thing is for sure, this couple is in need of some anger management courses. At first we weren’t sure what the lady was doing, but then it becomes apparent that she is holding him down by sitting on him.

The witness said that he left the scene because he feared for his own safety.

“Kentucky State Police said no arrests have been made, but they are reviewing the video and will be consulting the county attorney to see if any charges will be filed,”, reported the local news.

To see if any charges will be filed? Of course charges should be filed. If charges do not end up being filed, that would simply be ridiculous and would allow this type of thing to occur with no repercussions.

The question of the hour is this: After watching the video below and reading the description above, what would you have done if it were you who witnessed this act of violence? Comment below in the Facebook comments section.

Previous article: Radio Host in Atlanta wants to have open carry protesters killed by police Next article: Father in CA shoots home intruder who turned out to be his daughter's ex-boyfriend