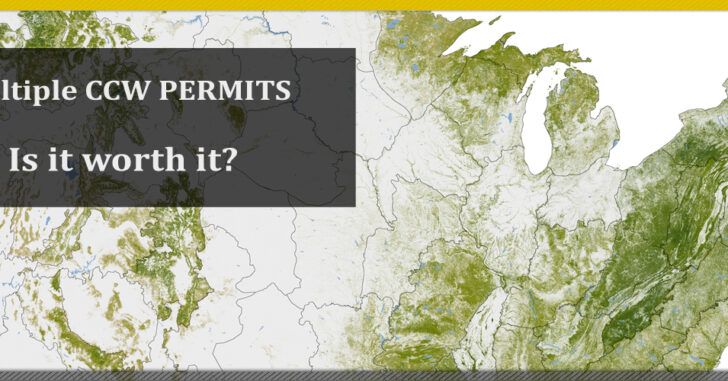 So many states, so little coverage. If you’ve ever thought about (but didn’t) getting a concealed carry permit from another state besides the one that you live in, give this a read to see if we can change your mind.

Let’s assume that you live in a state that requires a permit to carry concealed. Let’s also assume that you have this permit. Great! We’re off to a nice start. Now, let’s say that you want to take a day trip to a state next door, but that state doesn’t accept your state’s permit. We now have a legal problem if you want to carry.

Getting one permit is usually difficult enough, do I really need two?!
We like to think that it’s a good idea, and here are a few reasons why:

While these laws change frequently, there are many states that accept permits from other states around the country. We’ll give an example of my personal setup; I am a resident of New York and hold a NYS Permit, and I also have a Florida Non-Resident Permit. The latter was done via mail, cost around $120, and took just 6 weeks to receive. This Florida permit however, was worth every penny. Between both permits, I can legally carry in 33 states (currently). Compare this to just having my NY permit which is only accepted in 21 states.

Picking a state to get your non-resident permit in is crucial. Using this map will help you decide the best one to get based on how many states it will cover, and depending on your location and travel habits.

When new people are in office, new policies usually make their way in. If you’re good right now with your home state permit in a state you visit frequently, that may change at anytime. With an additional permit that has reciprocity with that same state, you have a better chance of remaining covered in that state to legally carry concealed. Think of it has having a ‘backup card’ in case you ever need it because the last thing you want is to travel without your firearm on your hip.

If you travel, for what you get, it’s a great investement. The Florida permit that was explained above has a shelf life of 7 years before it needs to be renewed. The initial investment was around $120, then you are responsible for another (currently) $107 every 7 years. Not bad for coverage in that many states, if you ask me.

Friendliest states to get a non-resident permit

The list is small. Overall, we have found the following three states to be the most friendly when it comes to non-residents applying for concealed carry permits: Virginia, Florida, Utah. Give each one a good solid look at what they offer, how much they cost, and then take into consideration which coverage will benefit you the most based on your travel habits/future plans.

As always, if you choose this route and are traveling, make sure that you stay current with the laws of the state(s) that you plan to visit. The last thing you want is to get pulled over during a traffic stop with useless concealed carry permits. That will end up costing you a lot more than it would if you had done a little research online before traveling.