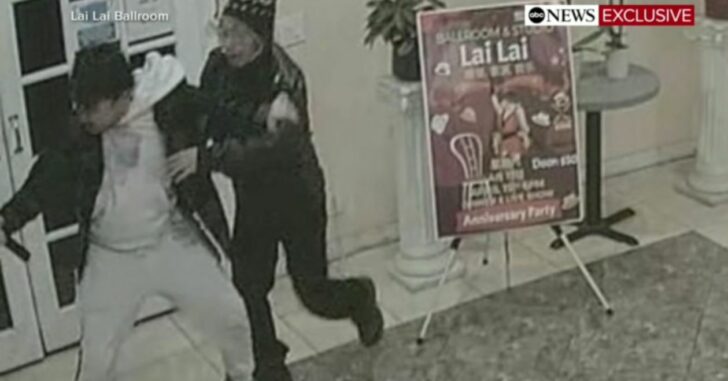 ALHAMBRA, CALIFORNIA — A man has been identified as the hero that prevented a second mass shooting on the night of the California mass shooting that happened over the weekend.

His name is Brandon Tsay, and he single-handedly prevented a second mass shooting in Alhambra, California, unarmed.

He wasn’t really thinking about that at the time, however. According to his interview with ABC’s “Good Morning America,” he thought he was going to die.

He reportedly heard the “sound of metal” in the lobby of Lai Lai Ballroom and Studio, a dance hall.

“That’s when I turned around and saw that there was an Asian man holding a gun,” Tsay said.

“My first thought was, I was going to die here. This was it.”

Tsay, however, was about to prove to be made of sterner stuff than the average person. Tsay has what proved to be unreasonable, incredible courage.

Instead of running, Tsay just charged the guy.

“When I got the courage, I lunged at him with both my hands, grabbed the weapon and we had a struggle,” Tsay in the interview.

“We struggled into the lobby, trying to get this gun away from each other.”

“Finally, at one point, I was able to pull the gun away from him, shove him aside, create some distance.”

Gun in-hand, he told the would-be killer, “Get the hell out of here. I’ll shoot you.”

“At this point, I thought he would run away, but he was just standing here contemplating whether to fight or run away,” Tsay said.

“I really thought I would have to shoot him if he came at me,” he said.

He likely would have. It’s possible that Tsay’s only path to survival in this scenario was to charge the gunman — but that doesn’t make what he did any less heroic.

The initial report by Sheriff Robert Luna of Los Angeles County said that two individuals disarmed the mass shooting suspect, according to CNN. However, Tsay and his family both maintain that he took him on solo.

Authorities suspect that the shooter in this case was Huu Can Tran, an reportedly elderly Chinese immigrant. However, with a rapidly-evolving situation such as this, total confirmation of the shooter’s identity is still pending.