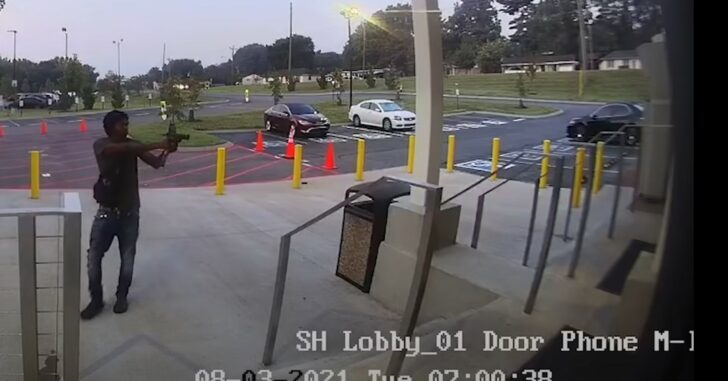 ANTIOCH, TENNESSEE — Three people were shot when a gunman came to their place of employment during a shift change and opened fire. The suspect, identified as an employee of the same location, was shot by police after he pointed his gun at them on the street nearby. The suspect died from his injuries.

BREAKING: Active shooter investigation underway at Smile Direct Club on Antioch Pk. Call went out just before 6 a.m. Two employees were shot & are hospitalized. Suspected gunman was shot by MNPD on Antioch Pk & was taken to a hospital.

The three employees shot were identified as 46-year-old Johnny Hardin, 66-year-old Carlton Watson and 54-year-old Thomas Abbott. Hardin and Watson are security guards, and Abbott is a manager. Hardin is in critical condition and Watson is stable. Abbott was treated and released.

The video below shows the suspect firing on the employees, as well as his deadly encounter with police that ended the incident.

“SmileDirectClub is saddened at the shooting that took place at its manufacturing facilities this morning. The incident was contained quickly by security personnel on site. The safety of our team members is a top priority for our Company and we maintain strict security protocols and a no weapons policy at all of our facilities. We are working with the local police as they investigate this matter.”

Previous article: Mexico Suing US Gun Manufacturers Over Arms Crossing The Border Next article: A Cautionary Tale: Bad Things Happen To Really Good People - Woman Murdered By Couple That She Was Trying to Help