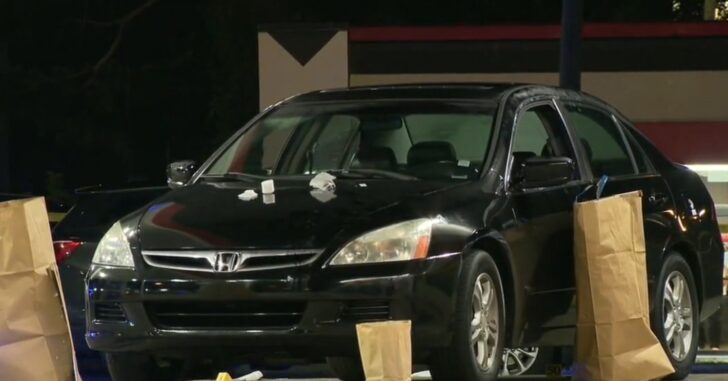 DECATUR, GEORGIA – Two men were fatally shot, and two others wounded in a shootout at a gas station late Tuesday evening.  Police say it happened around 10:30 p.m. at the Exxon at the corner of Glenwood Road and Austin Drive.  According to detectives, 59-year-old Charles Hickman walked up and fatally shot one of the men in the group. The deceased was identified as 27-year-old Marvin Jackson.

As some of the group ran away, Hickman also tried to flee the scene. Some of the group remained and opened fire on him, and he turned and fired on the group. Two men, one his late 20s and the other in his early 30’s, were hit. One was wounded in the leg and side, the other in the buttocks.  Both were rushed to Grady Memorial Hospital by paramedics and were in stable condition. Their names have not been released.

After being shot several times by the group members who remained, Hickman dropped his gun and died on Glenwood Street. Investigators say more than fifty rounds were fired from at least four different firearms, leaving a car in the station’s lot riddled with bullet holes. Police do not know what motive Hickman had for killing Jackson.

Officials say that all the men involved are locals, and no charges are expected as the fatal shooting of the original aggressor is being considered self-defense. Miraculously, no other bystanders or passing motorist were injured.

Previous article: Church Carry Signed Into Law By Governor DeSantis Next article: Backcountry Camper Forced to Shoot Aggressive Bull Moose That Destroyed Campsite and Charged Him and His Dog