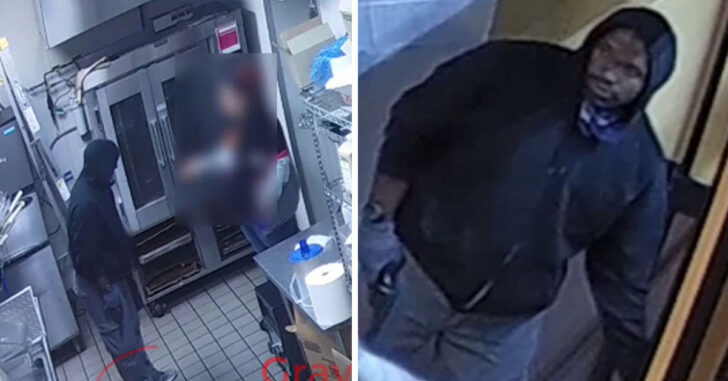 PHILADELPHIA, PENNSYLVANIA — A reward of $20,000 is being offered for information leading to the arrest of a suspect who robbed a Dunkin’ Donuts store manager as she was arriving to work for her shift, then after she complied, he shot her in the head.

The suspect is described as a Black man in his late 30s to early 40s, medium complexion with a goatee and mustache, and had a medium-to-stocky build. He was seen wearing blue zip-up hooded sweatshirt, gray cargo sweatpants, light gray New Balance sneakers, an analog wristwatch on the right hand, and blue gloves with a blue COVID-19 mask.

The woman arrived to work around 5:51 am, and was pronounced dead just 6 minutes later. The suspect approached her as she was unlocking the door and went inside with her. While inside, the woman is seen complying with the suspect’s demands.

2/2 WATCH: ⁦@dunkindonuts⁩ surveillance video of store manager,41, met by cold blooded killer as she arrives for work after 5am. She complied with everything&gave him all cash in office but he shot her in the head anyway on West Lehigh Avenue ⁦@FOX29philly⁩ pic.twitter.com/OxDVo8J8cY

In the end, he decided to shoot her in the head anyway, killing her instantly.

This is why we carry, and this is why we train. There are people that walk among us who don’t play by the same rules, and they never will.

There were numerous opportunities to make a move on this suspect, armed citizen or not. Distractions are some of the best ways to gain the advantage, such as the suspect paying attention to the safe, as seen below. His gun is in his right hand, pointed to the floor. His left hand is occupied with the safe, and the victim is standing to his left, and he’s no longer focused on her.

If you don’t have a tool such as a firearm or bladed weapon, one can get creative. But if you decide to fight, you have to be 100% ready to go with everything you’ve got.

The thug life will catch up to this guy eventually, whether it’s life in prison or being taken out by one of his own, his days are numbered. Hopefully sooner than later, he’ll be removed from society so that he’s unable to harm anyone else. And I’m fine with whatever way it happens. Maybe his next target will be armed, and gets an opportunity to defend themselves.

No arrests have been made, but officials are hopeful that the reward will bring in useful information.