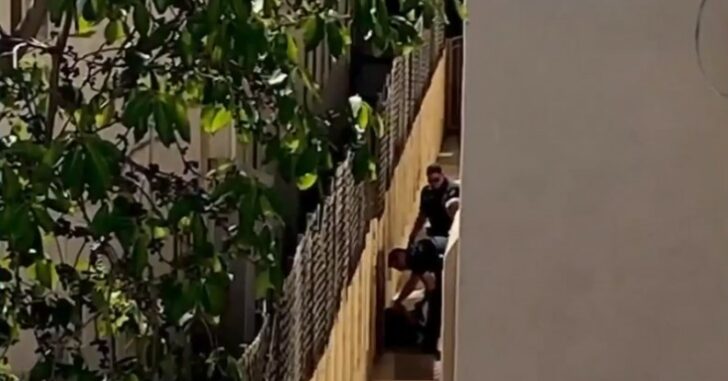 LOS ANGELES, CALIFORNIA – In a bizarre chain of events, an LAPD officer was shot multiple times with his own service pistol by a burglary suspect who was also wearing the officer’s body armor. It happened around 2:25 p.m. Wednesday at Sherman Oaks Apartments, near Vesper Avenue and Weddington Street. Police responded to a reported assault with a deadly weapon with shots fired.

According to LAPD Chief Michel Moore, the off-duty officer and a woman left their apartment and entered the locked parking garage under the building.  A stranger was sitting in the officer’s privately owned vehicle. The suspect had already donned the officer’s bulletproof vest and gained access to his service weapon. The officer confronted the man, leading to an altercation which quickly escalated into a gun battle between the two.

The officer suffered multiple gunshot wounds to his upper torso and one to the thigh. “The officer goes back to his vehicle inside the subterranean garage, rejoins the other individual he was there with and places those guns next to the vehicle and collapses,” Moore said.

The suspect suffered gunshot wounds to his shoulder, arm, and leg. After he was shot, the suspect was seen throwing the officer’s firearm magazines, which he had also taken from the officer’s bag, over a fence.

“From what started out as a burglary, a theft into a vehicle, and the senselessness of this escalated into this level of violence just has me extremely troubled,” Moore stated.

Both the officer and suspect where transported to the hospital in stable condition. The officer immediately went into surgery. The suspect is now in custody. Neither the officer, the woman with him, or the suspect have been identified. The woman was not injured. Chief Moore says the burglary appears to be random and the officer was not targeted. The investigation is ongoing.

Weapons should never be left in a vehicle if there is any other alternative.  When they are, they should be secured in a properly mounted vehicle safe. Getting shot is bad…getting shot with your own gun is worse…especially when the bad guy is wearing your body armor. At least the officer was carrying a defensive firearm at the time and was able to defend himself, but perhaps he would have been much better off to avoid the confrontation altogether and wait for his on-duty colleagues to arrive and deal with the armed thief.

Previous article: A Real-Life Example Of How Terrible Over-Penetration Of Your Self-Defense Round Could Be Next article: Irresponsible Gun Owner Tries Shooting Fleeing Robbery Suspects, Ends Up Shooting Store Employee Instead