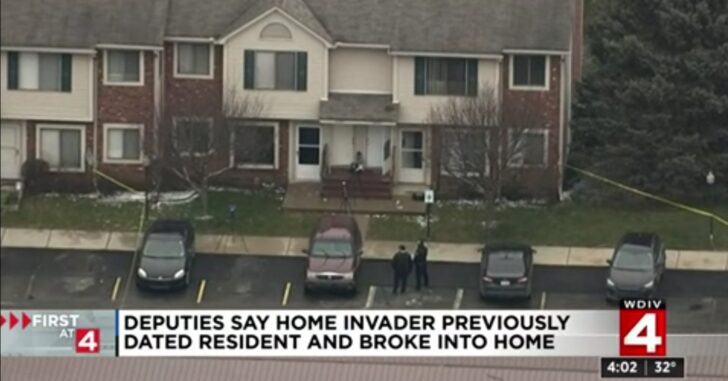 HARRISON TOWNSHIP, MICHIGAN – A man was fatally shot while trying to break into the condo of his ex-girlfriend early Monday afternoon, according to police. Macomb County Sheriff’s deputies were dispatched to a report of an active home invasion at the Harrison Woods Lane condominium complex at around 12:36 p.m. on Monday.

The 27-year-old female caller said that her ex-boyfriend was breaking into her home. During the call, several gunshots could be heard in the background. Additional calls from residents in the area also reported hearing gunshots. Upon arrival, officers found three people inside the residence.  The female occupant, the body of the intruder, and another male.

The suspect, identified as Brandon Williams, 26, of Redford, was located at the top of the stairway near the second floor of the unit. The other man, a identified only as a 27-year-old from Inkster, shot the intruder multiple times with a 9mm handgun, which was taken as evidence. The gun was registered to the man, who also has a concealed pistol license.

Police are familiar with the couple, as they had previously been called to the address to resolve disputes between Williams and the woman. Both the woman and the man were detained for questioning by police and were later released by the Macomb County Prosecutor’s Office.  The investigation is continuing and will be presented to the prosecutor’s office when completed.

A neighbor who asked not to be identified commented on the incident saying, “This community is very peaceful. We never have any issues here.”

Previous article: Intense Video Shows Officer Shooting Armed Man That Was Holding Gun To Baby In The Middle Of The Street Next article: Suspect Killed and Homeowner Injured in Home Invasion Gunfight