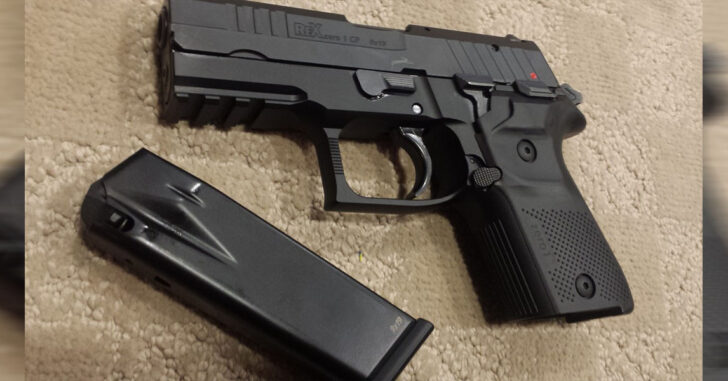 I had the opportunity to review the Rex Zero 1 last year at Shot Show 2016 and became very interested in it’s design and function. Immediately I thought this pistol was a Sig copy for a couple hundred dollars less but the more I looked into the pistol, I learned the Rex Zero 1 was a one of a kind handgun that was getting amazing reviews. As it’s popularity grew over the past year, reviewers were raving over it’s reliability and accuracy. To top it off, many people on my channel were requesting a Rex Zero 1 review based on all of the positive coverage.

I thought, how great could it possibly be as it is joining a crowded class of alloy framed double action – single action hammer fired pistols? Oh sure it has some nice features, feels great in the hand and has a smooth trigger but is it really in the same class as CZ, Sig Sauer and Lionheart? Yet the reviews for this gun were overwhelmingly excellent as the requests continued to pour in. Flash forward one year later and what did Arex Arms feature this year at Shot Show 2017? A Rex Zero 1 CP compact model and I have to admit, yes it was of the same class as the top pistol makers. The slightly smaller compact model spiked my interest and I just had to check it out.

At first glance, the Rex Zero 1 CP is impressive with very nice machining and packed with features. Also, Arex Arms says that the service life of 30,000 rounds can be expected. That is certainly intense however after shooting this gun, I have to say, it has lived up to all the hype over the past year. Let’s take a more in-depth look at this pistol. The MSRP is $670 however when I looked at various sites I found the average price to be around $600 which is right in the ball park for alloy framed hammer fired handguns. The two piece polymer grips are slightly textured as the grip itself offers a full three finger hold on the gun with the help of the magazine baseplate. The two magazines included hold 15 rounds with clear sight holes. The magazine release is ambidextrous and positioned to be reached without having to alter the angle of the gun. The thumb safety is also ambi making this pistol left handed friendly. The thumb safety could be utilized for those who prefer to carry “cocked and locked.” The slide stop lever also serves as the pistol’s decocker. The Rex Zero 1 is the only pistol, that I know of, to have a dual purpose slide stop lever and I find the dual function to work very well. The metal three dot sights are bright and the slide has a loaded chamber indicator bar that is slightly raised when a round is loaded. The slide also has deep cut front and rear serrations for a strong charge and/or press checks. The frame is made of hard coat anodized aluminum with a matte graphite black finish. Arex Arms also offers foliage green and flat dark earth cerakote finishes that look beautiful. A 1913 picatinny rail located on the forend is nice for those who enjoy attaching lights and lasers to their handguns. The double action trigger pull is a deliberate 13 pounds and the single action is 5.5 pounds. I was able to shoot the single action very quick and on target. The SA trigger has a little take up with a fairly short reset. It’s not the shortest single action trigger I have fired but it certainly works well with this gun. I also like the serrated external hammer that allows the user to easily cock back the hammer to move the trigger to single action mode. To disassemble the Rex Zero 1 is an easy process that requires no tools. Once assuring the gun is unloaded along with removing the magazine, lock the slide back, push down the takedown lever to release the slide and remove the upper assembly with no need to pull the trigger. One will notice the full length frame rails that connect the slide. Then remove the uncaptured recoil spring and metal guide rod and then the 3.85 inch barrel. The pistol is then completely field stripped. To reassemble, simply perform the same steps in reverse order. It is worth mentioning that once the slide is positioned on the frame, by pulling back on the slide will automatically turn the takedown lever in horizontal position which locks the slide in place (see video).

I took the Rex Zero 1 CP to the range and put 150 rounds of Remington UMC through it. I really liked the way this pistol shot. It was comfortable and pointed very well. I had a couple other guys with me and we all agreed that it was extremely accurate. All of us made contact with the 10 inch steel target with ease. I moved back to 15 yards and easily hit the target within the first couple shots with continued accuracy throughout the afternoon. The pistol shot consistently smooth and accurate with each mag we ran through it. The double tap follow up shots were extremely quick with very little movement of the gun. To sum it up, the Rex Zero 1 CP performed excellent and I really enjoyed shooting this handgun. It is quality made, feature packed, left handed friendly and very accurate. I now understand why so many people rave about the Rex Zero 1 and look forward to many more range sessions with this pistol. Arex Arms has a winner here and I am proud to have it in my possession.