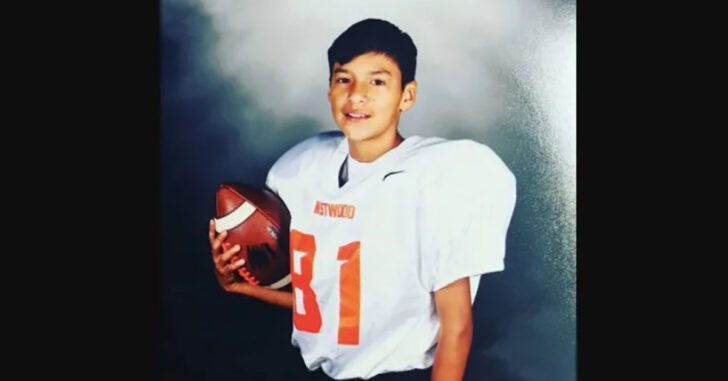 AUSTIN, MINNESOTA – A young man who kicked in a bedroom door to stop his mother’s husband from attacking her was stabbed to death by the man, according to Austin Police.  The incident occurred around 8:50 a.m. on December 15th, in the home of the couple and six children.

Juilo Cesar Guadalupe Rodriguez, 15, showed no fear or hesitation as he jumped into action to stop his stepfather from attacking his mother.  Jaime A. Vaca, 27, was choking Angie Rodriguez when Julio confronted him.  Vaca grabbed a knife and fatally stabbed the youth.

Arriving officers found the woman outside with a stab wound to the neck, and her son on a couch, bleeding from his injuries.  Vaca was located hiding in a bathroom with a knife which he refused to drop. Officers subdued him with a stun gun and found five children hiding in an upstairs room.

Vaca told detectives that after stabbing the teen, he went upstairs and kissed the other children goodbye, intending to kill himself.  When told that he boy had died, he replied, “I’m a murderer”.  Vaca was charged on December 16th by Mower County District Court with second-degree murder and first-degree assault, with a first appearance was set for the 18th.

Austin Police Chief David McKichan said in a Facebook post that the violence resulted in “one of the most challenging and tragic calls I can recall in our city’s history”, adding “Despite everyone’s best efforts, we were unable to save the young man who acted the most heroically of anyone yesterday. All of us wanted a different outcome for him. What he did in the defense of his family was incredible and should be recognized. His love for his mother and his siblings was proven without a doubt and all who responded and have knowledge of the investigation were moved by his actions. He saved their lives.”

It’s difficult to tie firearms into every situation, because they’re simply not for everyone or for every household. Even so, having self-defense skills should be on everyone’s to-do list.

Domestic violence is also a very difficult thing, with many victims being trapped in their current situations. Know that confidential help is out there, and if you are a victim of domestic violence, don’t be afraid to talk with someone.