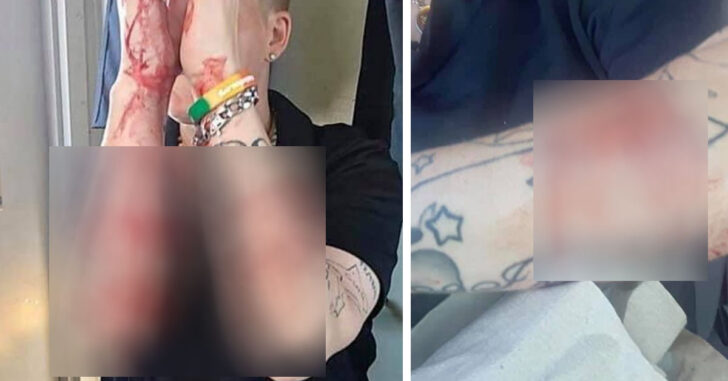 While a mask is a part of the story here, we’re not going to turn this into anything political or similar. This is about self-defense, handling strangers, and keeping yourself safe.

The images below are graphic in nature and may not be suitable for all viewers.

According to the man in the photos below, he was just getting off the bus and walking the rest of the way to work. He was approached by a man who asked him for a cigarette. He goes to give him one, and a small conversation ensued about a mask that the victim had with him.

Long story short, he was able to break free and run for safety, but he didn’t realize initially that the man wasn’t swinging and trying to throw punches; He was slashing at him with a knife.

The images below are graphic in nature and may not be suitable for all viewers.

In many instances, we don’t see people like this as a threat. They come and go, and that’s the end of it. We’re in a strange time, however, and outside of that fact, you still don’t know who you’re going to have hanging around at any given moment.

Some points that were mentioned along with the photos were spot on. They included important discussions such as;

Luckily, the victim kept his arms up to deflect the knife from his face and vital parts, and was able to run off and out of harm’s way to seek medical attention.

It’s an absolute shame that he had to endure this attack, and we can only hope that the attacker was captured and arrested.

Keep your situational awareness in the forefront of your mind, and always know what’s happening around you.

Previous article: Guest At Wedding Shoots Groom In The Chest, Bride Won't Speak With Authorities Next article: Portland Chaos: March Through Suburbs With Guillotine, Bullhorn Announces To Residents "Make Sure You Are Offering Us Refuge."