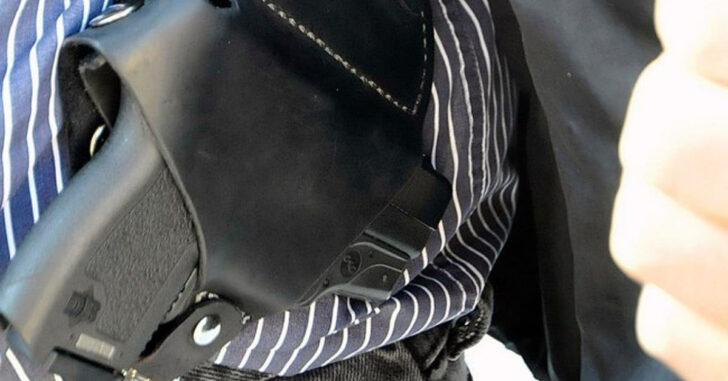 FAIRFAX, VIRGINIA — A man reportedly shot himself in the lower abdomen after his pistol discharged while he tried to holster it. The event occurred in the National Rifle Association’s National Firearm Museum.

According to Crime Online, the person who shot himself was an employee at the museum. He was treated at a local hospital and no charges are believed to be pending for him.

Holstering a firearm shouldn’t be a dangerous proposition. A few of the common culprits include the trigger snagging on the holster and a failure to keep one’s finger clear from the trigger during the holstering process.

I’m glad the guy survived and will hopefully make a full recovery. It is, I imagine, quite a traumatic thing to inflict injury to one’s self with a firearm. There’s likely more than a little embarrassment over the situation itself and then the immediate concerns of health and well-being.

The NRA’s National Firearm Museum holds over 3,000 firearms and hosts a number of informative classes for gun owners. This could be classified as a training failure.

One of the ways we can avoid these situations is to always carry in a holster that has decent retention and is molded to the gun. This prevents the lip of the holster’s edge from pushing in and rubbing against the trigger. And, of course, so long as a person’s finger is kept free from the trigger, he or she is usually good to go.

For beginners, there’s always some apprehension about holstering a loaded pistol. After all, any loaded pistol is usually only a trigger pull away from firing. The dangers associated with that can be greatly alleviated by simply practicing those two points we brought up in this article: holster retention and finger control. If you’re interested, we wrote up an informative article that goes into detail about some of the things you may want to consider when choosing an everyday concealed carry holster.

If the idea of holstering with a round in the chamber is something that bothers you, I recommend practicing with a dummy primer. You can usually pick one up at your local gun shop. It’s just a bullet with powder grains and projectile removed but the primer remains intact. An empty, primed shell should give you a good indication of whether or not your holster is safe for a loaded handgun.

If you want to make your own primed, empty casing for practice, you can buy an impact bullet puller. I’ve included a link to just a generic one. It runs around $11.99 before shipping. There may be some cheaper ones out there or just find one that works with your budget.

This device can be used to remove the projectile from most common handgun rounds. Just pour out the powder into a safe storage container and you should be left with nothing more than an empty case and live primer.

When holstering with a live primer case in the chamber, if you hear it ‘pop’, you know you set off the gun.

If you don’t want to go through all of that, you can pick up a decent holster that’s molded to the contours of the gun and always keep your finger clear and off the trigger.

Previous article: #DIGTHERIG - Dean and his SIG SAUER P320 Compact in an Alien Gear Holster and On Your 6 Designs Mag Carrier Next article: The Equalizer: Woman, With Protective Order Against Ex, Shoots Him After He Breaks Into Home