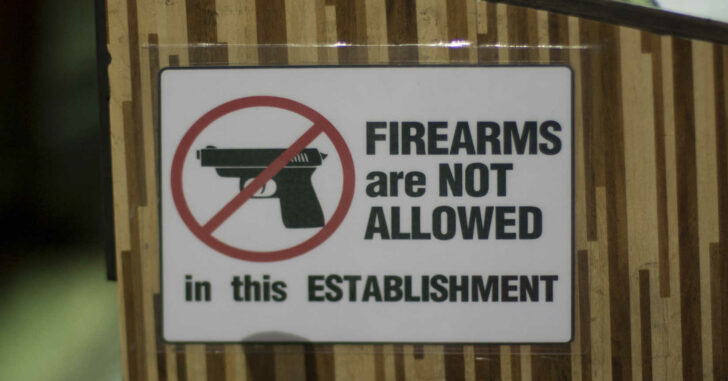 We all hate having to disarm ourselves when we go into businesses that don’t allow guns. None of us like to be disarmed especially in the event that something bad goes down. A new bill being introduced in Minnesota would help gun owners do something about that.

According to the bill, any business that prohibits firearms would have to include a new disclaimer along with their “no guns” policy. Currently businesses that are generally open to the public are allowed to ban firearms from their establishments, even when the firearm owner has a legal carry license. However, these businesses are required to make a “reasonable request” via a sign with specific language in accordance with state law, or they may verbally let their patrons know.

This new bill would change those requirements by adding something new. All notifications now must state that anyone prohibited from carrying a firearm is “under the custodial responsibility” of the business that is banning guns on their premises.

Details of the new bill state that a business or property owners which prohibits the carrying of firearms “shall assume absolute custodial responsibility for the safety and defense of the unarmed person” while the person is on the property.

This proposed change allows a civil recourse option for legally armed citizens being prevented from carrying their firearm into the business or property. This could be any form of injury, including death, or economic loss that could have been prevented if the person had been allowed to carry their firearm.

Although this bill, HF 3051, is only being proposed on the local level in Minnesota; this hopefully would open the door for consideration on the federal level. When legally licensed firearm owners are denied their right to carry, and are then subjected to violence with no way to defend themselves, someone should be held responsible. With this bill, that responsibility now falls on those directly responsible for the disarmament.

What do you think? Would you like to see this as a federal law or even a local law in your own area? Do you think gun owners should have the right to sue those who prevent them from being armed? Or would you argue that businesses have the right to dictate what is allowed on their premises?

Previous article: [VIDEO] Guns Are The Equalizer, And It's Up To Each Person If They Have One Or Not Next article: What Would You Do If This Angry Guy Was Running Towards You?