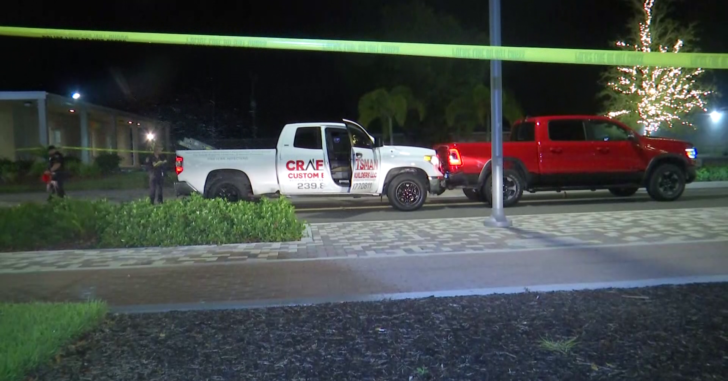 CAPE CORAL, FLORIDA — Yup, it is a Florida Man story. However, this one is of the “creepy” variety rather than the funny kind. It involves two girls who drew the ire of a man at a bar. When the women rebuked his advances, he went a little crazy.

We spoke with two of those people who ran for help: a mother and daughter on vacation, only in Cape Coral for one night. They’re calling the man who saved them a hero.

Ashley and Emily Gallagher say they’re grateful to be alive. All thanks to one Cape Coral man’s quick thinking. “He’s an amazing person and he saved our lives and he’s a hero, he really is,” Ashley said.

A hero for saving them and two others from Lesniak who, they say, bought their group some drinks at Rusty’s downtown Thursday night.

“I think he was trying to hit on my daughter-in-law and definitely get her to go home with him, or whatever it was. And I think when he realized that wasn’t going to happen, that’s when he said we were taking advantage of him by spending his money,” Ashley said.

“All of a sudden, like, ‘boom,’ he turned violent, angry,” Emily said. The group tried to leave and get in their car and that’s when, investigators say, Lesniak chased after them.

So mom and daughter are stopped in Cape Coral for the night. They are out enjoying a drink at a local bar. A man at the bar (Lesniak) strikes up a conversation and decides to buy them some drinks. When Lesniak realizes the women are not interested in him beyond casual conversation, he freaks out.

A white pickup suddenly stops near the girls and allows them to quickly get inside. Lesniak attacks the car, screaming and yelling at the driver. Behind the wheel was Amir Rossi. Seeing the situation getting out of hand, Rossi draws his firearm. Seeing that Rossi was armed, Lesniak retreated away from the vehicle.

Although it should have ended there, Lesniak wasn’t done. It wasn’t long after that Lesniak reappeared in his own vehicle. Lesniak began ramming Rossi’s truck over and over again.That is when Rossi decided enough was enough.

Rossi once again drew his firearm and this time fired shots in self defense. Rossi got out of the trucks and held Lesniak at gun point until police arrived. Lesniak was arrested and is facing multiple charges.

It’s difficult to find fault in anything Rossi or the girls did. Everything in this category falls on Lesniak. Just because you buy a few drinks for a girl, doesn’t mean they owe you anything. To freak out when you realize they aren’t interested in anything more than conversation, is a bad bad thing.

One has to wonder if alcohol played a part in Lesniak’s behavior. Perhaps drunkenness is to blame for his actions. Although it doesn’t make what he did right, it might help explain his bizarre behavior.

Our Good Samaritan Rossi is the hero here. Everything he did during this situation was the right call. It all started when he recognized the distress of the women, and gave them shelter in his truck.

When Lesniak tried to assault him, Rossi drew his firearm to protect himself. This sent Lesniak running, and Rossi recognized the threat had passed and he did not pursue the situation.

When Lesniak returned with his own truck and began his vehicular assault, Rossi recognized that his life was in real danger. This is when Rossi once again retrieved his firearm, but this time fired shots. Holding Rezniak at gunpoint to prevent him from doing further harm was the right move.

Rossi served as a hero that night, saving the girls from untold fate at the hands of a crazed Lesniak. He showed great situational awareness, and restraint with using his firearm. Ultimately, it was because he was armed that he and the ladies remained safe.

Previous article: Three Thugs Run After Seeing The Delivery Driver They're Targeting Is Armed Next article: Restaurant Manager And Armed Robber Get Into Shootout, Sometimes Leaving Them Be Is A Better Option