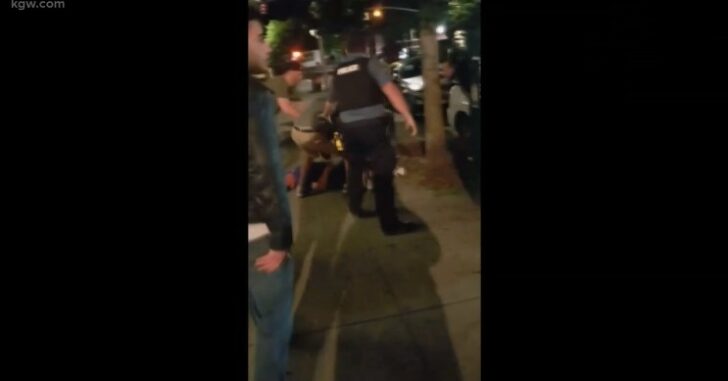 PORTLAND, OREGON — A concealed carrier had his firearm fall out of it’s holster and when he went to pick it up, he was shot and killed by police. The story isn’t a simple one, but it is one that could have been avoided. Campus police are responsible for the shot fired, as local media reports;

Witness Keyaira Smith told KGW that a fight had broken out outside the bar and campus officers at first stood by and watched. The man who died tried to intervene and de-escalate the fight, which involved a friend of his. While doing this, a gun holstered on his hip fell out. He went to pick it up and shots rang out, Smith said.

Another important part to this story is that another witness reported that the concealed carrier had announced to people that he had a firearm and was licensed to carry.

“The guy who got shot was trying to deescalate the situation the whole time,” said witness Patrick Dean. “He was feeling pressed by a bunch of people. He told them I have a gun I’m a licensed carrier.”

Reports say that a friend of the concealed carrier was involved in the fight and that he was trying to help calm everyone down. Campus police were apparently there when the fight began, or arrived shortly after. The concealed carrier made the decision to intervene in the fight, and it ended up costing him his life in an unexpected way. A video, which you can view at the top of this article, shows the altercation and what transpired after the firearm fell to the ground. When the gun is seen by police, they immediately say “DROP THE GUN” and then a few seconds later, multiple shots are heard.

It’s unknown if the deceased man had a registered license to carry a firearm. According to the PSU policy, only law enforcement officers are allowed to carry a firearm on campus. While the Cheerful Tortoise sits in the middle of PSU campus, it is in a privately-owned building.

It is not known if the concealed carrier had been drinking that night or if anything else will end up playing into this story, but it is an important one to look at. We will have a follow-up article on this story when more information becomes available. As for now, it can be a sticky situation when involving yourself –armed– into a fight, especially when police are just feet away. One thing is for certain; it’s never wise to reach for your firearm in the presence of a police officer. If it falls out of the holster, let it fall. Inform police immediately that you are licenced to carry and let them handle things from there. They don’t know who you are and in this case, have walked up to a fight between multiple people on the street. Should the officers have intervened more? Should the concealed carrier have gotten himself involved under the circumstances? Let us know with your comments below. The President of PSU, Rahmat Shoureshi, issued a statement Friday afternoon. “We are cooperating with the Portland Police Bureau’s investigation. Some of the questions we have been asked are about the conflicting reports from media outlets interviewing those who say they witnessed the incident. Portland Police investigators are interviewing witnesses, and those interviews are ongoing. Investigators have asked any witnesses with video of the incident to contact them. At this time, our focus is on fact gathering rather than speculation. “Consistent with our policies, our two campus police officers involved in the incident are on paid administrative leave pending the outcome of the investigation. “This is the first officer-involved shooting at Portland State, and I have asked our Campus Public Safety Chief to conduct a thorough internal assessment and evaluation of this incident as well as our policies and procedures.”
Categories: General, News

Previous article: Woman Shot At After Attempting to Run Over Three Family Members In a Row Next article: EQUALIZER: Fiance Puts Woman in Fear for Her Life, Deadly Encounter Follows