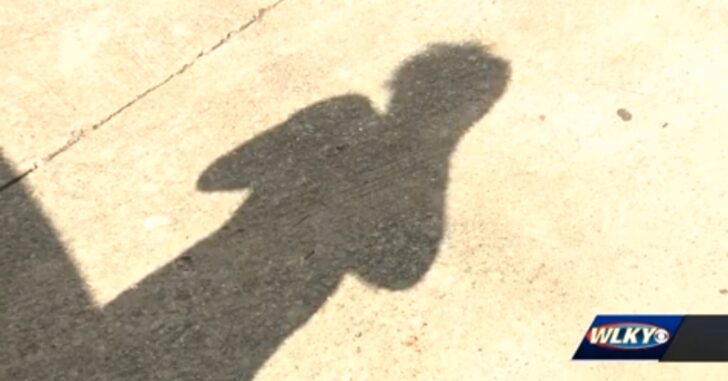 An expecting mother, along with a young child in the car, found themselves in serious trouble when the woman’s ex began assaulting and threatening her. Things got so bad, the woman made the decision to shoot the man as he drove the car.

“It was one of those situation, I wasn’t going to let him kill all of us,” the mother said while speaking with WLKY’s Tre Ward. “I wasn’t even thinking about me at that point. I was thinking about my child.”

After months of separation, tensions ran high last Wednesday when police say Domonique Hughley, 33, grew angry because the mother of his children moved on following their break-up.

“All of a sudden, I get a blow to the face,” the mother said.

The assault took place in front of a liquor store. The woman ran inside asking for help, and a man gave her a phone to call police. Before anything could happen, the ex came in and dragged her back to the car, with bystanders simply watching.

According to investigators, Hughley then began speeding and swerving through traffic. Court records state he was threatening to crash the vehicle and “mess everyone up” and claimed he was going to take her “far away and kill her.”

Before they got on the highway, the woman went into the back seat and got a gun. She shot her ex before he could do any damage.

“Before we could get on the highway, I had a choice between all of us dying or defending myself and my son,” she said. “I grabbed a gun and I shot him.”

When police found him, he was shot multiple times in the arm.

This isn’t the first time the man has been in trouble with the law. He was arrested at one point in his life for choking a pregnant woman.

She fears that he’ll get out and then take things to the next level. It’s a terrible fear to live with, but luckily this woman has the means and smarts to defend herself and family.

Previous article: If You're Leaving Florida To Escape The Hurricane, Know Which States You Can Carry In Next article: Walmart Turning Into Dick's; Sales Of All Handgun Ammunition Ending, Also Telling Customers That Open-Carry Is A No-Go