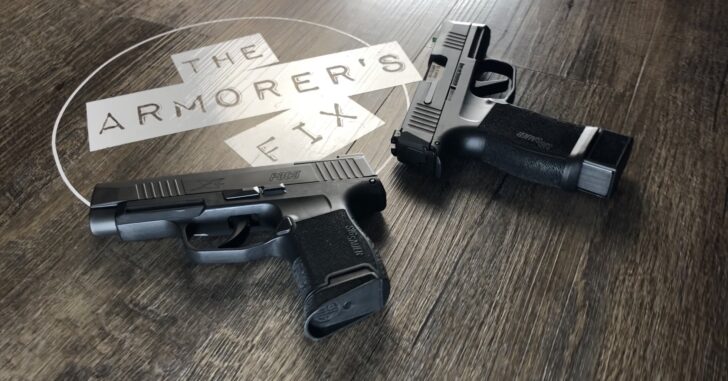 I’ve been quite the fan of the 365 since SIG overcame the initial release issues. While there are a plethora of people slamming the platform, there are many more who have formulated their own opinions through ownership and have experienced the firearm’s capabilities first hand. The XL, while a confusing design to some firearms enthusiasts, I’m quite the fan and have to say this is the size of firearm I’ve been wanting for over half a decade. Thank you, SIG!

Let’s jump into the differences between the two. The XL is the P365’s bigger sister. She comes outfitted with a longer slide, longer barrel, longer sight radius, longer beavertail, and a longer grip. All things that will help us control the firearm to shoot a little more accurate and speed up our recoil mitigation for faster follow up shots which is really what it’s all about… Looking awesome on the range!

The slide is cut optics ready and impatiently awaiting the teased release of SIG’s new Romeo Zero, which is a miniature, micro red dot sight. The sight is equipped with a built-in rear iron sight, so don’t worry. You’ll still have your back up irons. There’s also a new flat trigger coming from the factory in this firearm. While it looks cool and in theory makes you more accurate, I can’t say I’m the biggest fan as of yet. Its a tough call because the 365 I was running has been through a lot more break-in than the XL, so its a little unfair to call out the new trigger this early, but I’m not impressed. As of now, I still prefer the original trigger.

The recoil system extends to the full length of the XL. Glock failed us on that with their 48 having the same short recoil system from the 43X. The problem here is when you extend the length and not the recoil system, the extra weight out front tends to flop around a little more after each shot, ultimately slowing us down. The XL recoil feels very similar to the 365 due to this change. I didn’t feel a lot of difference between the two but I did not encounter the floppy response I received from the 48. Tighter splits equal more hits. Boom. You can steal that one.

We took the time to swap the slides and shoot the hybrid 365s and that’s where I fell in love. The XL grip module on the P365 slide was hands down my favorite. I love the short and simple, easy to maneuver feeling of that original small slide. You can’t beat the XL grip. It feels amazing and the flared mag well gently hugs the bottom of my hand for a phenomenal fit. That is a fantastic hybrid setup. One can assume SIG will eventually get around to releasing the XL grip modules, but I have to say, I love having both firearms which allows for four carry setups.

One concern some may have with running the short slide is the infamous primer drag issue. While this hasn’t caused me any grief, I can’t say that’s the same for all owners… or former owners. I know plenty of people who gave up on the platform early on due to frustrations with this. While SIG fixed the breakage issue, the short slides do still have primer drag which is surprisingly common in small 9mm handguns. I’m a little blown away at the industry response that only seems to call out SIG for this. The XL slide has no issues with primer drag, so if that’s your hang up on the 365, you’ll be happy with the XL.