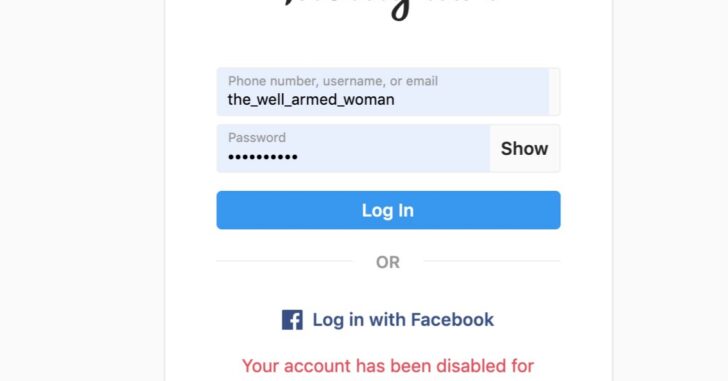 The latest victim of social media banning is The Well Armed Woman. Their Instagram page was removed without warning or notification. They did nothing that went against Instagram’s terms.

The Well Armed Woman @instagram page has been shut down. Poof, it's gone!! No warning, no response, nothing. Empowering and educating women to #RefuseToBeAVictim to rape and murder appears to offend them! pic.twitter.com/2azQiPZzG5

They’re back up, but only because they had a strong support group from the gun community.

Even though their page is back, they are still in the dark as to why it was removed in the first place.

When it first went down over the weekend, owner Carrie Lightfoot reached out to me and told me what had happened. Carrie and I go back a few years, and she knows that I have certain contacts that have helped with these issues in the past, internally within Facebook and Instagram.

While talking with Carrie, she went into detail regarding what had happened;

Without notice, The Well Armed Woman Instagram page was taken down. For 5 ½ days we had lost all access and communication with our 32,000 followers. It was only with the assistance of great friends in the firearms industry and media outlets that we were able to raise enough public outrage to create enough pressure for our page to be reinstated Thursday morning.

While I don’t think that I helped in this particular case, some big names got behind her and The Well Armed Woman to get to the bottom of it.

After those big names made a stink and maybe talked with their contacts, the Instagram page magically comes back to life.

With zero communication from Instagram to The Well Armed Woman.

Even though it (kinda) worked out for Carrie and her business this time, that doesn’t mean it won’t happen again.

The removal of firearms related pages is absolutely infuriating. There has been absolutely no communication from Instagram. No warning, no explanation, no apology, nothing.  I submitted an appeal, but again, received no response.

We don’t post ANYTHING even close to being inappropriate. My focus is totally on empowering and educating our followers. For them to take down a page focused on women taking responsibility for their own self-protection against violence is a new low.

And more alarming; what about all of the gun-related businesses that are removed from social media who have no contacts or connections with either the social media giants or within the gun industry, or simply aren’t large enough to create buzz around their problems? It’s likely that they lose their pages, and all the work they’ve done to grow them.

One of the following reasons is likely why TWAW’s Instagram page was removed;

In any of those cases, it doesn’t seem like there’s much communication with the page that’s been taken down. Carrie informed me that they have not heard anything from Instagram, before or after the page was removed.

And, interestingly, the first time that The Well Armed Woman ever had a Facebook post flagged was on the same day their Instagram account was taken down. The “see details” links below lead to nowhere.

So, can we even hold companies like Facebook and Instagram accountable for these actions? What does their internal process that handles page removals look like? It’s obvious that the systems in place need to be reevaluated, as accounts and pages are being removed for no apparent, legitimate reason.

Ending the conversation, Carrie voiced her frustration with the practices of social media giants, and the role they play in our lives.

This now common practice of censoring or removing sites that are pro Second Amendment or those educating law abiding gun owners truly threatens not only our right to free speech, but it removes any possibility for discussion. Debating and discussing issues such as firearms, gun ownership and the Second Amendment is an important part of what makes America different. We are different because we are FREE to debate. The censorship by big tech and social media platforms eliminates this basic freedom and allows them to form, design or manipulate the WHO we are as a country. That makes this a very serious issue and one that needs to be addressed immediately.