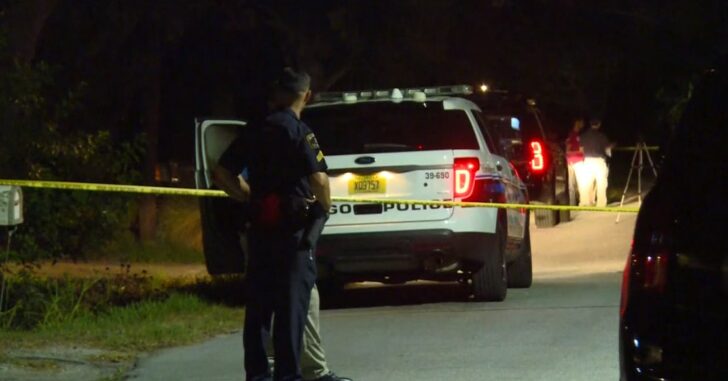 LARGO, FLORIDA — A 21-year-old was riding his motorcycle to his home when he was confronted by a 40’s-year-old man who was intoxicated and apparently agitated.

It happened just before 10 PM Thursday night, and the man on the bike couldn’t make out what the other man was yelling at him because of his helmet. Then, things turned bad.

“The man became aggressive and punched the motorcyclist through the open visor of the motorcyclist’s helmet, leaving a contusion on his face,” Largo Police Lt. Randall Chaney told reporters in an email.

At this point, the armed motorcyclist was trapped under his bike after he fell over.

The aggressor walked around the bike, and the armed motorcyclist was able to get free and start to take some steps back. Witnesses say he warned the man that he was armed and that he had a permit to carry a firearm.

“The man moved his hand under his vest at his waistline and the motorcyclist, who had his gun in a holster at the small of his back, thought the man was reaching for a weapon,” Chaney said. “Witnesses say the motorcyclist backed away for approximately 20 to 30 yards, telling the man multiple times that he did not want to shoot him.”

After the man made a move that the motorcyclist deemed threatening, he drew his firearm and fired three times. The man was shot in both arms and in his torso.

He is currently in serious condition at the hospital.

While the motorcyclist wasn’t sure what the man was reaching for, it became clear after the incident was all said and done.

“The man was wearing a belt sheath for a six-inch fixed blade knife,” Chaney said. “The knife itself was found on the ground at the scene. The motorcyclist said he did not see the knife.”

Based on the information provided, it seems that this armed citizen did everything correctly, including giving ample warning to the aggressor before making the decision to pull the trigger.