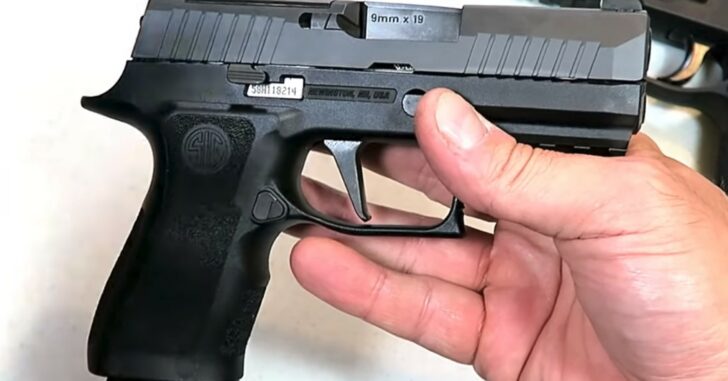 It’s been a while since I’ve seen so many people excited about a new handgun. Don’t get me wrong, every year seems to bring a lot of enthusiasm to the gun world however many people eventually say the new pistol is a Glock knockoff. They also say it is a plastic piece of junk. It seems to me that many guys want an all metal handgun equipped with night sights, three magazines, a red-dot optic and a case of ammo for $200. The amount of inventory and choices in today’s market has spoiled the firearm consumer. They now want everything included but not willing to pay a good amount for a quality handgun.

The Sig Sauer P320 XCompact has changed the “want everything” mindset for 2019 because it has everything needed (minus the case of ammo). The Kicker is, the P320 XCompact is selling for around $680 and people are lined up to buy it. It has been a while since I have seen so many shooters take interest in a new pistol like they have with the Sig P320 XCompact.

In 2019, Sig expanded it’s long line of P320 pistols to include a smaller and lighter model than their Sig P320 XCarry pistol. The XCompact model mimics the XCarry pistol but its smaller. The XCompact model is loaded with features that gives the buyer everything needed (except range time) to carry the handgun. They created this pistol equipped so that nothing else is needed with the exception of a red-dot for those who prefer that.

The Sig XCompact has a 3.6 inch barrel, night sights and a slide that is optic-ready. The optic-ready slide is suited to for a Sig Sauer Romeo 1 or a Leopold Deltapoint Pro. It comes with two 15 round magazines, an ambidextrous slide stop and a flat face trigger that breaks at five pounds. It also has a loaded chamber indicator bar that raises above the slide when a round is chambered. Additionally, the Sig P320 XCompact has a forend picatinny rail, front slide serrations and an extended rear beaver-tail for greater control. They also undercut the trigger guard for a higher grip and indented the upper grip for improved ergonomics.

Like the entire P320 line of handguns, the XCompact model is modular. Shooters have the choice to purchase a variety of polymer frames. By simply removing the take down lever from the frame, the entire internal chassis can be removed and placed into a different frame. Sig Sauer sells modular frames for around $50 but aftermarket companies are also producing their version of “the best” frame for a Sig P320 handgun. Modularity gives shooter choices which is always a good thing inthe shooting world.

There are very few negative points to speak of so please allow me to nitpick. The slide width on the Sig P320 XCompact is 1.3 inches wide. I understand that has to do with space needed for a red-dot optic to seat properly however for those who carry inside the waistband, it is thick. It would be nice if Sig could have come up with a way thin out the slide a bit for more comfortable holster carry.

Another point worth mentioning is the price. Good things are seldom cheap and cheap things are seldom good however $680 – $730 is a bit much. I’m sure over time the cost may drop a little however it is currently inflated which takes a good amount of people out of the XCompact buying market.

At the range, the Sig P320 XCompact fired every round with ease. The case ejection was a bit weak but for the most part, it was fine. The lightweight flat face trigger was noticeably pleasing when shooting. There was very little trigger travel between shots which aided to its accuracy. Even with one-handed shooting as seen in the video, the XCompact was smooth and on target. It’s the kind of handgun that gave the confidence needed to settle in right away and feel comfortable with its function.

The Sig Sauer P320 XCompact is the hottest striker-fire, polymer frame handgun on the handgun market. The interest is high as people are opening up their wallets and begging Sig Sauer to take their money. History has taught us that even though the pistol may have long staying power, the high interest may not. There is always something else to show up and garner the attention of shooters who cannot get enough of this stuff.

Previous article: [VIDEO] Handgun Malfunction Caught On Police Body Cam, And It Happened At The Worst Possible Moment Next article: College Student Kicked Out Of School For Posting Photo Of Her Holding Handgun On Social Media