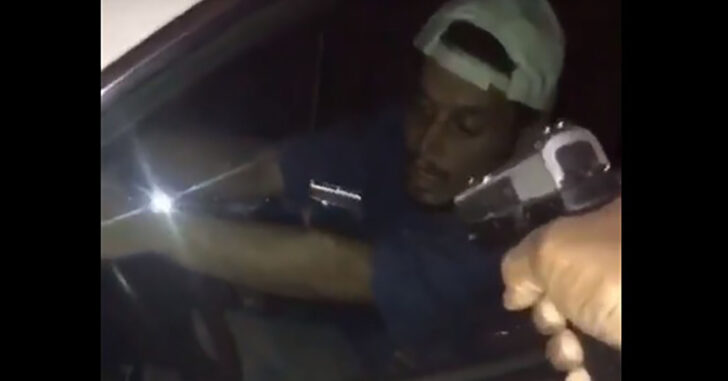 See the look on the suspect’s face? That’s the look of defeat, at the hands of an armed citizen.

Someone recently shared a video with us that shows a homeowner holding a suspected car thief at gunpoint after catching him red handed.

It doesn’t get more damming than sitting inside a car that you don’t own.

The video, which we are unable to embed but is viewable here, was uploaded late last year.

Since the bad guy had absolutely no where to go, he was forced to keep his hands on the steering wheel until police came to put him in cuffs.

As soon as police arrived, they instructed the armed citizen to put his gun down in a very straightforward and courteous way. As soon as he did, multiple officers are heard saying ‘Thank you’. This is how it should go, and it’s how it usually goes. The officers were aware that an armed citizen was holding the suspect at gunpoint, and this information going into a call is crucial.

When you see officers arriving, if you’re able to, it’s best to already have your firearm re-holstered or somewhere safe other than in your hands. If it’s not reasonable to do so, wait and listen carefully to the officer’s instructions.

The homeowner was also live-streaming the incident, which we wouldn’t typically recommend since it requires the use of one of your hands. That hand holding the phone could come in … handy … if you needed two hands to defend yourself.

In this particular case, however, it would seem that the live-streaming wasn’t causing any issues. Still, we have to think about other possibilities, such as the bad guy having an accomplice nearby. With that said, it’s always best to have both hands free in situations like this.

The homeowner happened upon the suspect digging through the vehicle, and was likely getting ready to try and steal it. Who knows, but it doesn’t matter since he wasn’t supposed to be there in the first place.

It would seem that the man behind the camera did a pretty solid job with this, as well as the responding police officers.

Previous article: [VIDEO] Armed Criminal Is No Match For His Two Targets, Who Are Both Armed As Well Next article: Springfield Armory XD-S® MOD.2™ 3.3″ SINGLE STACK 9MM