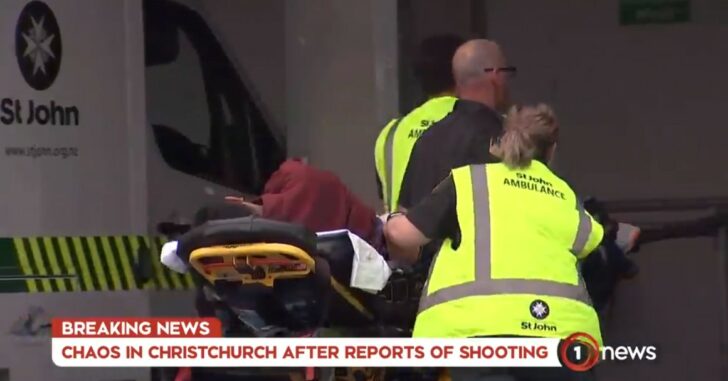 At least two mosques were the targets of mass shootings today, leaving an untold number of fatalities and injuries. Police say they have one suspect in custody but believe that there could be more.

The incident is apparently still ongoing, and is occurring in the city of Christchurch, New Zealand.

New Zealand Police released the following information to the public via their Twitter page;

1/5 Police is responding to a very serious and tragic incident involving an active shooter in central Christchurch. One person is in custody, however Police believe there may be other offenders…. This is an evolving incident and we are working to confirm the facts…

2/5 however we can confirm there have been a number of fatalities. Police is currently at a number of scenes. We understand that there will be many anxious people but I can assure New Zealanders that Police is doing all it can to resolve this incident.

3/5 We urge New Zealanders to stay vigilant and report any suspicious behaviour immediately to 111. We are mobilising resources nationally and support is being brought into the District. We are still working to resolve this incident and we continue to urge Christchurch…

4/5 …residents to stay inside. We ask all mosques nationally to shut their doors, and advise that people refrain from visiting these premises until further notice.

5/5 There will be a media stand-up at 5pm today at the Royal Society Te Aparangi on Turnbull Street, Thorndon, Wellington.

The incident began around 1:40 pm local time, and calls to police started flooding in shortly after.

As reported by abcnews.com;

New Zealand Police Commissioner Mike Bush said in a statement that “This is an evolving incident and we are working to confirm the facts, however, we can confirm there have been a number of fatalities” and that police were at a number of scenes. He asked all mosques across the nation to close to their doors.

Bush said police were dealing with “a very serious and tragic series of events” and “they involve an active shooter” and “multiple fatalities.”

“We have one person in custody, but we are unsure if there are other people,” Bush said in a video statement. Bush said in a written statement that “police believe there may be other offenders.

Some reports have suggested that upwards of 30 people have been killed, but that number has not been confirmed by any law enforcement.

A live streaming video of the incident is said to have been taken by the attacker, but this video is said to be extremely graphic and is not being shared by media at this time.

Hundreds of people were said to be inside at the time of the incidents, and one witness told CNN that the mosque he was at, had heard gunfire for 10 to 15 minutes before it stopped.

We will continue to watch this incident.