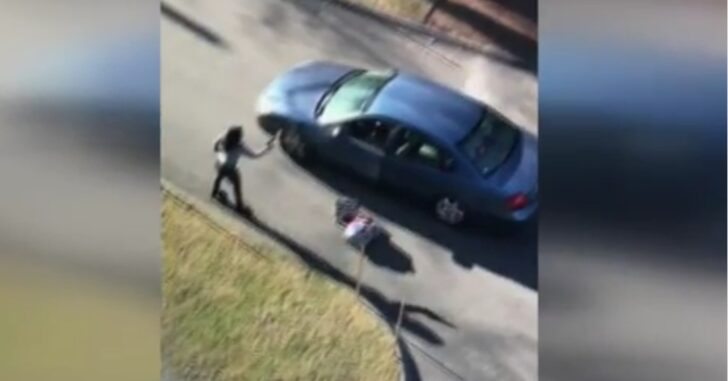 SAUGUS, MASSACHUSETTS — A witness to a bad fight outside got out his camera and recorded the confrontation. Little did he know that a gun would soon be produced, taken, and then fired.

The neighborhood is shaken up after the ordeal, which ultimately left two people in jail and many wondering how something like this could happen in their neighborhood.

Lisbet Flores, 20, and Canseco Morillo, 22, were arraigned in Lynn District Court Friday in relation to the incident, according to the Essex District Attorney’s Office.

Flores is facing a number of charges including, armed assault to murder, carrying a firearm without an FID card and malicious damage of a motor vehicle. She is being held without bail until a dangerousness hearing set for January 3.

Morillo is currently being held on $20,000 bail for a subsequent offense of carrying a firearm without a license. He is due back in court on Jan. 18.

What led to these charges, you may ask?

It started off as a fight, and the man in the car threw items out on the street. Then, as the video shows, the woman grabs a gun from the man. It seems that she tried pulling the trigger, but nothing happened. It then appears that she had to rack the slide to chamber a round.

That’s where we get the ‘armed assault to murder’ charge.

If the man had the firearm already out, which it would seem that he did, she could say self defense. However once she had the gun, is it still self defense if he’s in the car? Probably not, unless she suspected that he had another gun in the car that he could use.

After she fires the shot, which missed the man, he gets the gun back and gets back into the car. The woman then slams her hands on the hood. This action would make me believe that, even though he was in possession of the gun again, she was not in fear of her life.

Previous article: #DIGTHERIG - Cruz and his Colt Combat Commander in a Galco Holster Next article: [WATCH] London Pub Owner Takes On Two Intruders With His Bat