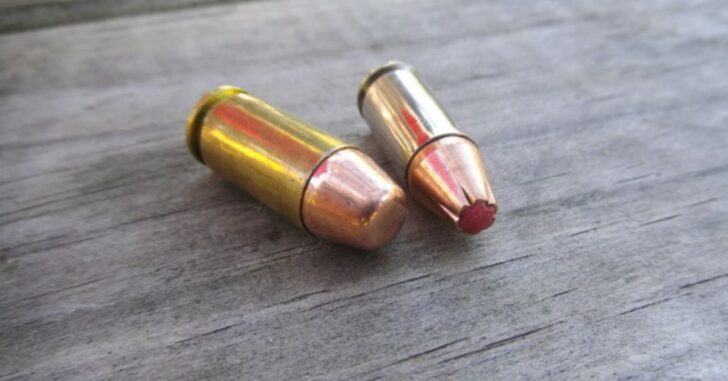 By Josh Wayner via TTAG

Today on State Your Case we’re taking a look at two of the most hotly debated and widely carried cartridges of our day and putting them head-to-head: the 9mm and .40 S&W. The only thing I ask is that when you state your case about what I write here, at least try to be composed. Here we go.

The 9mm (9x19mm Luger, NATO, etc.) is probably the most common centerfire pistol round on the market today. There is no denying that fact, like it or not. To balance this article properly, we will start by looking at some points that make the 9mm less desirable than the competition. Firstly, the 9mm isn’t widely known for its power. When I talk to owners of the .40, I hear that they went with it over the 9mm because they says it isn’t powerful enough for general carry and duty use. This is both true and untrue.

The standard 9mm, when loaded with anything in the 115gr-147gr FMJ style, isn’t a great performer. It penetrates well, but due to low frontal area and a ‘pointy’ bullet profile, it tends to lack in tissue damage and ‘stopping power’. Yes, stopping power is a made-up buzzword, but it’s thrown around a lot when talking about smaller vs. bigger calibers. In terms of simple physics, the .40 has more kinetic energy due to higher projectile mass given equal velocity. Higher energy and a wider, flatter bullet make the .40 objectively better than 9mm FMJ in most circumstances.

When it comes to hollowpoints and other modern expanding bullets, the .40 still has an advantage again over 9mm. Because of the greater bullet mass and thus lead on target, the .40 can expand more and deliver more devastating wound channels. The 9mm has a deficiency here as it can only expand so much, and in many cases the small bullets don’t have enough physical material in them to open up very wide. These, again, are generalizations, but they do hold true for most available products.

The .40 S&W has its greatest advantage in that it is substantially more powerful than 9mm in most handguns. But the power level is where things tend to go fuzzy for many .40 owners. That greater energy results in greater recoil, which has given .40 a reputation for being “snappy.”

For quite some time, the commercial .40 S&W options were about equal to its parent round, 10mm Auto. That gap has widened in recent years as many companies are now loading 10mm Auto to its full-house potential. The .40 can be thought of as 10mm -P in most ways.

The 9mm has gained in popularity because it offers several things that make it something of a Goldilocks cartridge. Smaller, lighter guns can be had and they aren’t brutal to fire. Most standard-sized pistols in 9mm can hold 15+1 or 17+1 rounds, which is a significant advantage in combat and competition. The 9mm is also inexpensive in bulk when compared to other centerfire rounds. It’s easy for almost any shooter to use and readily available virtually anywhere. As far as the performance of the cartridge is concerned, the 9mm has benefitted from modern materials and engineering more than most any other pistol round. The commonality of 9mm means that the market has seen an explosion of innovation. Modern 9mm self-defense ammo is incredibly good compared to decades past and can sometimes outperform larger calibers in barrier penetration and ballistic tests. But there are limits there.

As far as guns go, the 9mm and .40 S&W are often chambered in models that have identical or near-identical frames like the GLOCK 17 and 22, Smith & Wesson M&P SHIELD 9 and .40 series, and many others. Side-by-side, .40 caliber pistols are lighter than 9mm guns, but only marginally. Recoil is more noticeable and capacity is slightly less with .40 as opposed to 9mm. The argument that the 9mm is better solely on the merit of greater magazine capacity is only marginally true, as it’s usually a difference of only two rounds given the same exterior magazine dimensions. For many people, the extra two rounds are a worthy sacrifice when the greater bullet mass is considered.

Along the same lines, the 9mm has an advantage because it can hold more ammo for less weight than the .40 S&W. A magazine load of 17 rounds of standard 124gr 9mm adds about 7.5oz to the gun, where an identically sized 15 round mag loaded with standard 180gr .40 S&W contains about 8.25oz of ammo. This means that, given the same physical size for a 3-mag loadout, the .40 adds 2.25oz and loses six rounds. The heaviest 9mm loads are virtually all lighter than the lightest .40 rounds, so the weight consideration is valid, but not a huge deal.

At the end of the day, the .40 S&W is something of a fading star. The general population has been gravitating towards 9mm over the last couple decades and the .40 is losing significant ground in most markets. Just check your local gun store’s used gun counter for evidence of that.

While the variances may not be very significant when looked at on paper, fewer real-life end users are going for the .40. Substantial technological improvements in 9mm ammo design have resulted in widespread adoption in both law enforcement and civilian circles.

The difference in recoil, capacity, and ease of use may be minute to many, but the long-term edge goes to the 9mm. If I had to assign a winner here, it would have to be the 9mm. I don’t say that lightly, as I believe that the .40 is a very good cartridge considering the circumstances around its design and characteristics.

In an identically sized gun, the 9mm just has more going for it. If I were to go for a large handgun, I would probably look at 10mm Auto as opposed to .40 S&W because it does everything the .40 does, but does it better and with only a marginal increase in weight.

As objective as I tried to be in this piece, I just can’t give the .40 the title. As a stand-alone, .40 can run with the best, but it just can’t quite get into that sweet spot that the 9mm has claimed. I believe that the .40 has a place today, but I’m just not sure where that place is when 10mm, 9mm, and .45 ACP are dominating the automatic pistol market.

Previous article: [VIDEO] Real-Life Purge; What Would You Do If You Were Caught In This Violent Mix? Next article: Man Shoots Estranged Wife After She Strikes His Mother With Her Car