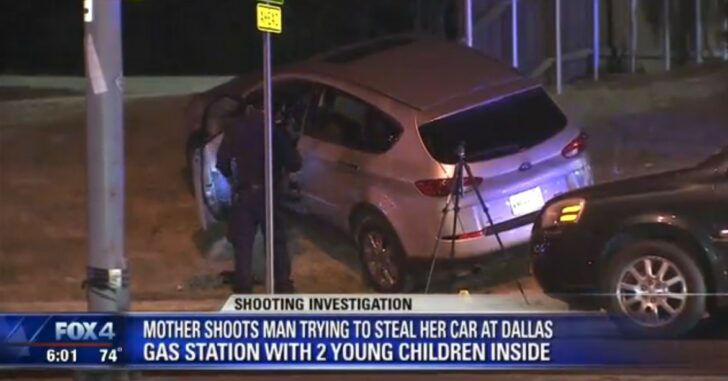 DALLAS, TEXAS — An armed Texas mother was paying for gas when the unthinkable happened. A man jumped into her car, with her two children inside, and was bent on driving away. Michelle Booker-Hicks quickly sprung into action and was able to jump inside the car. She retrieved her firearm that was in the glove box and quickly put a stop to the threat.

“I proceeded to jump in my backseat and told the gentleman to stop, to get out the car. He would not get out of the car. He turned around and looked at me. I reached over the armrest to get my glove compartment and that’s when I fired at him once I got the gun from my glove compartment,” she said. The carjacker ran the car off the road and crashed into a fence. He was arrested and taken to the hospital for treatment.

The man was shot once in the face. He has been identified as 36-year-old Ricky Wright, and will likely be facing numerous charges after this failed attempt. It isn’t known whether or not Booker-Hicks has a concealed carry permit, but I will point out the risk of having your firearm inside the glove box. Had she not been able to retrieve her firearm, or if the suspect was able to get to it instead, things could have ended much differently. At the end of the day, this armed citizen defended her family and property, and this criminal will be spending some time behind bars.
Categories: General, Guns Saving Lives, News