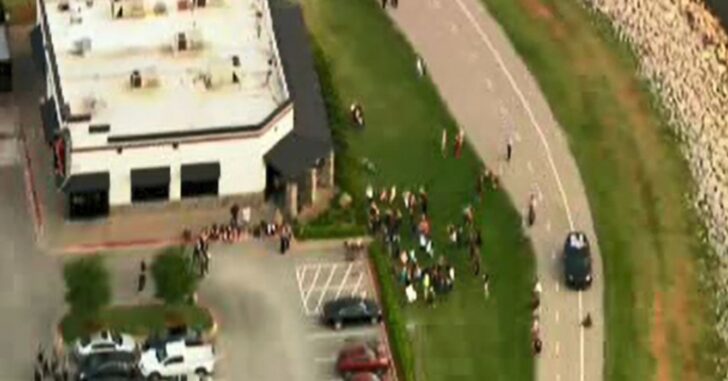 UPDATE: It has been confirmed that not one, but two armed citizens engaged the gunman at the scene. Both are credited with stopping the attack. Read the update here. ORIGINAL STORY: OKLAHOMA CITY, OKLAHOMA — An armed man walked into a restaurant this evening around 6:30 pm local time and opened fire, shooting two people. His rampage, however, came to a quick end thanks to an armed citizen who was also inside the restaurant at the time of the incident.

Lake Hefner shooting update: A man walked into the Louie’s restaurant and opened fire with a gun. Two people were shot. One person has been taken to a hospital with serious injuries. A bystander with a pistol confronted the shooter outside the restaurant and fatally shot him.

Initial reports said that three people were injured, but was later changed to two. The victims are said to be a mother and daughter who were out for dinner to celebrate a birthday. Both were reported to be in surgery, but are expected to survive.

CONFIRMED: A mother and daughter were shot while celebrating a birthday at Louie’s Lakeside.

The motive for the shooting is unknown, and police have not yet identified the suspect. This is an incident where we will never know if it was truly going to be a mass shooting because the suspect was taken out early on. The attempt to prove ‘thwarted mass shooting’ is sometimes impossible, simply because of that reason. If the suspect had many round of ammo on his person, for example, we could safely say that he was probably there to do some serious damage. “This is a blessing that it was stopped at this point, who knew when this guy was going to stop shooting people,” Cpt. Bo Matthews of Oklahoma City Police told KOCO.
Categories: General, Guns Saving Lives, News