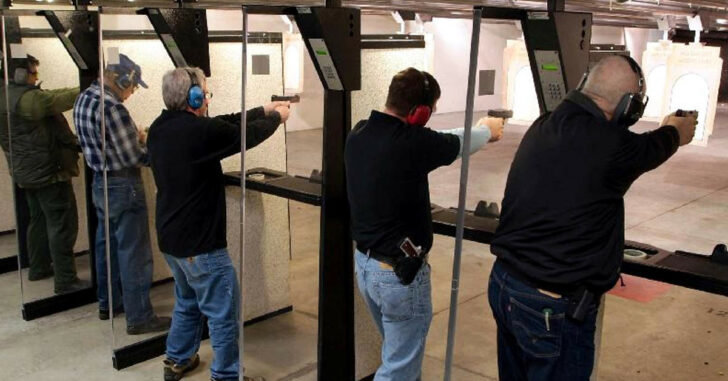 Everyone messes up at some time or another. Every gun owner will make a dumb mistake. The difference between a learning experience and a very big mistake is the ability to walk away with no one getting hurt.

While that sounds good in principle, range safety officers aren’t into putting up with anyone’s mistakes.

There’s a firing line. And the range safety officers monitor it closely to ensure no one is doing anything that could jeopardize themselves, other shooters, or the RSOs.

The RSO makes a determination, gives a recommendation, documents the incident, and ensures that the decision is complied with. If the RSO’s advice isn’t heeded, he has the authority to boot someone off the range.

Here’s 10 ways to get kicked off the range.

#10. Shoot at wildlife that wanders onto the range.

Animals can and have wandered onto live ranges. Just because they made a dumb mistake doesn’t mean you need to take advantage of it. There are conservation rules, state laws, endangered species watchlists, and all sorts of rules governing who can shoot what animal, where, and when.

If someone sees a deer randomly wander across the firing line and decides he’s going to take it out, he’ll likely be getting escorted off the range by the range safety officers. Depending upon the animal, the season, and the temperament of the wildlife conservation officers or Fish & Game Wardens, he may get out of the range with only a permanent ban.

If you see wildlife wander onto the range, you need to call it out and let the RSO know. On some ranges, that may mean hitting a range alarm or just simply letting an RSO know as soon as possible. Call it in. Save a life.

#9. Argue or brawl with other shooters.

If the guy next to you is a complete jerk, move over a lane or two. If the guy is a jerk and a danger to others — either by intimidating he’ll use physical violence or threatening another person — immediately get an RSO. He’ll be off that range faster than an empty case can hit the ground.

There is no room for macho bravado on the range. Save the displays of uncommon courage for the American Legion parade. When it comes to professionalism and safety, the range has to hold high standards for both.

#8. Failure to follow any of the four basic firearm safety rules.

Here they are so no one can claim ignorance:

Pretty easy, right? Well, the second an RSO sees you holding your finger on the trigger during times it’s evident you don’t intend to shoot, he’ll talk to you. If he sees it again, he’ll ask you to leave.

#7. Steal stuff from another guy’s bench

Reach over and snag somebody else’s cleaning brush? That’s a paddlin’.

It’s no big deal to ask someone to borrow a brush or some CLP. It is a big deal to take it without asking. Range safety officers and other range patreons all have the right to not have their stuff taken without permission. Doing so can land you in hot water.

The phrase, “it’s better to ask for forgiveness than beg for permission” — doesn’t apply on the range.

#6. Go forward on the firing line while the line is ‘hot’.

When the RSO makes the determination that everyone is behind the firing line, he will declare the range ‘hot’ unless something specific causes him to stop. Seeing a person in front of the firing line is a reason for him to tell shooters to hold fire.

If a shooter decides he needs to go forward of the line while other shooters are firing, he needs to let an RSO know. If it’s an emergency, there is usually an alarm or bell that can be activated to shut down the range.

Deciding, on one’s own volition, to just spontaneously move forward on the line while shooters are firing is both dangerous and extremely stupid. An RSO will immediately shut down the range if another shooter doesn’t do it first… And then that person who moved forward of the line will be asked to leave.

#5. Have a loaded gun in your hand while there’s someone forward of the firing line.

Right alongside declaring a range ‘not hot’ (not safe for firing), the RSO will usually request everyone put down their guns. This is a precaution to ensure that if the RSO sees someone with a gun in his hand, he knows he’s not supposed to have it.

In some cases, if an RSO has repeatedly asked you to not have your gun in your hand while there are people forward of the firing line, he may ask you to leave.

#4. Take your sweet time forward of the firing line when the RSO tells you to hurry up.

As annoying as it is when others don’t respect your time, it’s equally as annoying when you don’t respect theirs. When the firing line is shut down so people can move forward to retrieve, mark, or replace their targets, this isn’t the time to dilly-dally. Move forward with a purpose. Make a single trip out to the line, do what you need to do, and move back to the line.

If you see a guy constantly holding up the line by not getting his tasks down, the RSO will probably try to move him along. If the shooter continues to be a nuisance and hold up the line, the RSO may ask him to come back to the range at a different time when it’s either less busy or the crowd is less anxious to continue their training.

#3. Shoot before the RSO declares the firing line to be ‘hot’.

If there’s someone out in front of the firing line retrieving a target or taking his sweet time marking his target, that’s the RSO’s problem — not yours. At no point in time is it okay to commence firing until the range safety officer declares the line is ‘hot’; i.e. it is safe to shoot.

Failing to adhere to this can result in immediate dismissal from the range — potentially on a permanent basis.

#2. Tell the range safety officer to get stuffed after he tells you to do something.

The range safety officer is someone appointed by range management to oversee the conduct of the people using the range and ensure that safe practices are being upheld. While there are RSOs who let their role go to their head, ultimately the time to debate their logic is not on the range.

The range is their domain.

If you disagree with a decision or stern suggestion, you can ask to speak with them off the range or speak to their management.

In about 9.9/10 cases, range management is probably going to back the RSO… So you better bring your case packed with evidence that you’re right, the RSO is wrong, and he made a bad call.

If you decide to make a scene about an RSO decision, you’re likely to get booted from the range.

#1. Point your gun at another person.

This is probably the fastest way to get booted off the range. If a range safety officer sees you blatantly flag another person with a gun — loaded or not — you’re subject to get tossed off the line.

Here’s the thing: people can and have flagged other range-goers. It’s wrong. It shouldn’t be tolerated — and it should always be addressed either directly or indirectly. We wrote a decent article detailing how to handle getting flagged it if the situation comes up.

While some ranges will pay somebody to pick up all the brass, there are plenty club or private ranges that require you to pick up your own brass. It’s not like a shooter’s mom wanders behind him, picking up every brass off the ground. Not only is it the right thing to do, you’re also keeping the range clear for the next guy.

Hopefully, this article served as a bit of an educational reminder that there’s plenty of ways to do dumb things and win dumb prizes at the range. Don’t do any of them. Your time is better spent practicing safely. If you see an unsafe practice, let the RSO know. And, as always, carry concealed everyday, everywhere — and practice often.