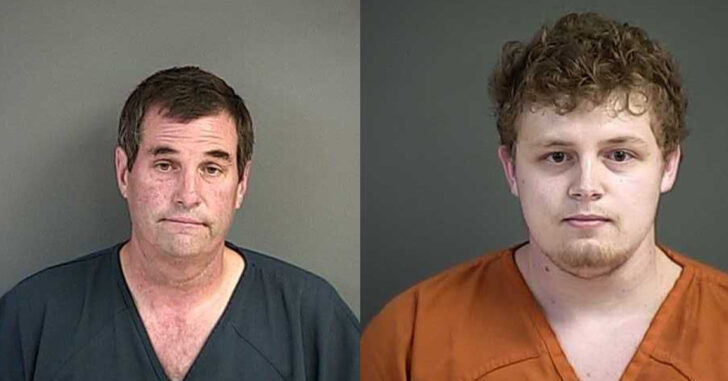 If you want to see knee-jerk reactions, look no further than this father-son duo who decided to open fire on a vehicle that had crashed in their yard. The driver was uninjured, but retreated as quickly as he could to avoid being shot.

Local news tells us how things went down;

Mike Sanderson told police he was sitting on the couch watching television when he heard an engine revving outside. After looking out to see the truck in his yard, Mike Sanderson grabbed his gun, a .22-caliber pistol, and went outside, according to court documents.

Mike Sanderson then dove to the ground after hearing gunshots coming from behind him. Soon, he realized that his son had grabbed a gun and started shooting several times as the truck was leaving, according to court documents.

During an interview with police, the son stated that he wasn’t quite sure why he was firing on the vehicle.

He said that he was sleeping when he heard the commotion outside. He grabbed his gun and went out, then emptied his magazine in the direction of the vehicle. He told police that he was scared and just started firing.

The driver was located by police and shared his side of the story;

[Adam] Smith told police he had been working two jobs and fell asleep behind the wheel, causing him to crash into the Sanderson’s yard. After waking up and realizing he had just crashed, he told police he saw the residence’s door fly open and a man walking toward the crash while shooting.

But when the man wouldn’t stop shooting, Smith said he drove away and later ditched his truck near the boat ramp because the vehicle’s drivetrain was damaged from the crash and he assumed that the men who were shooting at him weren’t “done with him yet.”

Regardless of how things went down, it seems that this father –and definitely the son– took things too far when reacting to this situation. The father may have had cause to fire if he felt his life was threatened, such as the driver trying to run him over. I’m not saying that happened, but it’d give credit to shooting at the vehicle.

The son, however, fired shots into the dark without having a single piece of knowledge of what was actually happening. That’s irresponsible beyond comprehension, and everyone in this story is lucky that the driver wasn’t injured or killed.

Both father and son are in jail, hopefully thinking about how things could have been handled better.

That’s a bad day for everyone.