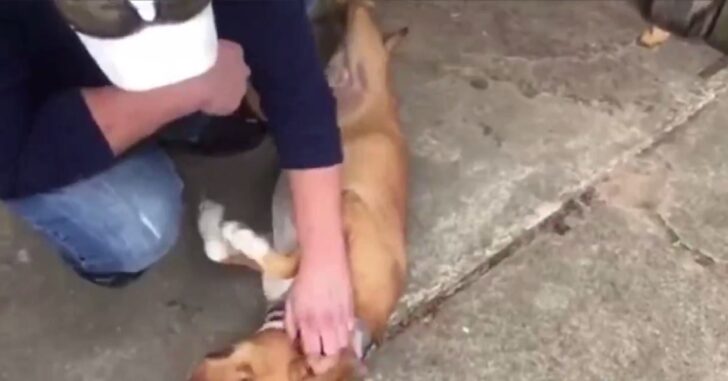 SHREVEPORT, LA — When a pair of burglars attempted to make a getaway after a burglary gone bad, they split up, and both of them ended up in a confrontation with armed neighbors who were happy to hold them until police arrived.

When the two burglars attempted the break-in, police were quickly called. They attempted to make an escape out a back window into the yard.

That’s when the fun began.

According to The Shreveport Times:

That’s when the men ran into (resident Josh) Burson’s 1-year-old pit bull/lab mix, Chyna, and it didn’t seem that the encounter ended well for at least one of the intruders. He lost a sock that police recovered from the back yard, Burson said. “I think she got him on the foot,” he said. “There wasn’t a shoe back there, but there was a sock laying on the ground, and it had some holes in it. So I think she got him whenever he was jumping out the window… We gave her a big ol’ bone for that last night.”

After leaving the house without the items they apparently intended to steal, the two men split up. One was held up by a neighbor a couple of doors down. The neighbor, who declined to give his full name, said he snuck up on the burglar, who was hiding in pampas grass near the neighbor’s above-ground swimming pool.

With his pistol drawn, the neighbor said, he ordered the man to the ground until officers could haul him off. The police account of the burglar’s arrests made no mention pampas grass encounter.

A citizen gunman stopped the other burglar. According to police, the burglar confronted the citizen and his father in a yard, pointing a .22-caliber pistol with a silencer at the pair. The armed citizen then fired a shot at the burglar, prompting him to drop his weapon. Police, who already were in the neighborhood because of Ogunmayin’s 911 call, arrived quickly to arrest both of the alleged burglars.

The men split up, but it didn’t do them a lick of good.

Armed citizens, all over the place, all the time. That’s what I’m talking about.